Hey there PokeBeach! I absolutely love the new Standard format, and today I’d like to share my thoughts on my favorite deck in this format: Golisopod-GX / Garbodor. Although it just won Bremen Regionals in Europe, I feel it still isn’t getting the respect that it deserves. Hopefully, by the end of this article, you will see my point and agree with me that Golisopod-GX / Garbodor is the clear, undisputed best deck in the format (BDIF). Without further ado, let’s get right into the list. 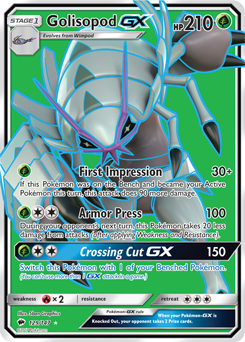 This list probably reminds you of the Bremen Regionals winning list, and it should for good reason. I have discussed and compared Golisopod-GX lists at length with Mees Brenninkmeijer, who ran 59 of the same cards as the winning list, and as such my list incorporates a lot of the same ideas and cards as his list.

For a long time I had a 4-3 line, as you want to get as many Wimpod as possible on the field turn one. However, I’ve found that I am still able to get at least two Wimpod on the field turn one in almost every game thanks to Brigette and four Tapu Lele-GX, so I was able to free up a slot in my deck for another tech. If you can find space in your list for a fourth Wimpod, it is certainly worth playing, but there are other cards that I do not have in my list currently that I would like to try to fit before I re-add the fourth Wimpod.

At first, I had only one Tapu Koko in my list, but I realized quickly how important Tapu Koko is in this deck and upped the count to two. If I don’t start with Tapu Koko, it is almost always part of my first Brigette, along with two Wimpod. Tapu Koko is a great opening attacker, as it softens up your opponent’s Pokemon to be Knocked Out with First Impression later on, as 120 damage (or 150 with a Choice Band) usually is not enough to Knock Out big Stage 2s. Second, Tapu Koko is important because it gives you a Pokemon with free retreat to promote, which is incredibly important in this deck with the heavy Guzma and Acerola counts. While you can get away with playing only one Koko thanks to two Rescue Stretcher, I highly recommend playing two, as it ensures that you’ll always have a Koko on the field when you need it.

Without VS Seeker in the format, I’ve chosen to max out on my consistency cards to make up for the loss. While three Tapu Lele-GX is usually plenty), my good friend Liam Williams convinced me to play four, as it ensures that you’ll always have a Tapu Lele in your deck when you need one. I really dislike dead drawing, so having another consistency out in my deck is something I am willing to devote deck space to.

What a difference a few months makes. Prior to Worlds, if I had told you that a deck would play more Garbotoxin Garbodor than Trashalanche Garbodor, you’d have called me crazy. Now, with VS Seeker out of the format and things slowing down considerably, Trashalanche isn’t the strong attack it used to be, while Garbotoxin is more useful thanks to the control it offers against much of the metagame. Trashalanche still has its uses, particularly against Espeon-GX / Garbodor, but most games you won’t use it. 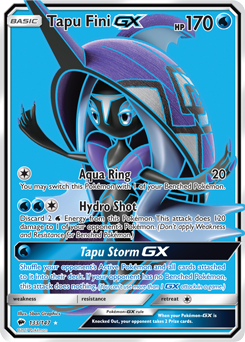 I want to start off by saying I take absolutely no credit for this tech; this brilliant addition to the deck was all Mees’s idea. I’ve just chosen to include it after he and Mike Fouchet convinced me how good the card is. So far, I have not regretted it at all, as Tapu Fini-GX has proven to be extremely important in a lot of matchups. Tapu Storm GX is most useful against Gardevoir-GX and Fire decks, as you can shuffle back a big Gardevoir (which is their win condition) or, against Fire, their Kiawe target, completely resetting their previous turn. Being able to deny your opponent from getting a Pokemon out that can one-shot yours is incredibly good, as Golisopod-GX will always win the two-shot war thanks to Acerola. Second, Tapu Fini is also a good attacker against Ho-Oh-GX / Salazzle-GX, as it can hit Salazzle-GX for 100 damage for one of any Energy and a Choice Band. This, in combination with Tapu Koko giving you the ability to do the same against Ho-Oh, gives you a fighting chance in what would otherwise be an unwinnable matchup for the deck.

Without VS Seeker, there is almost no reason to run anything less than this in every single deck in Standard.

While most decks run three Guzma, Golisopod-GX benefits from a fourth as it constantly needs to reset its Active Pokemon to trigger First Impression’s damage increase. Four Guzma also ensures that you will always be able to choose what Pokemon you attack; nothing on your opponent’s field is safe against this deck, which is good as it constantly forces your opponent to think about whether or not benching their Pokemon is worth it. This is especially important with their Tapu Lele-GX, because they get OHKO’d by a Choice Banded First Impression after a single Flying Flip from Tapu Koko.

Acerola is incredible in this deck, and I don’t understand why some lists exclude it. This card not only provides another out for resetting First Impression’s damage, but also denies your opponent Prizes, which one can argue is more valuable than its first use. There is no reason to not play at least two Acerola in any Golisopod-GX list, but three ensures that you’ll have at least two uses of it throughout the whole game, which is usually all you need in order to win the game.

While two Brigette would be nice to ensure that I have access to it even if one is Prized, I’m willing to take that risk, as it happens infrequently enough that it’s not worth devoting another spot to it. The ideal turn one Brigette is to grab two Wimpod and a Tapu Koko, as that ensures that on turn two you’ll have a Golisopod-GX evolution target as well as a Pokemon to promote to let you hit for 120 immediately.