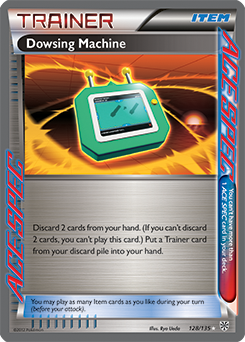 Hello readers! I apologize for my much-needed hiatus from playing and writing. Sometimes real life takes more than you expect it to and your hobbies must fall to the wayside. Because I had not tested or prepared for the NAIC, I performed poorly, going 4-0 then into 4-3 drop, and also went 3-3 at the 2017 World Championships. However, I am getting back into gear and ready to start this new season with so many great changes happening already. I am delighted to announce that I have been picked up to be on Ultra Pro and Pro Play Games’ A Team! Being a sponsored player is a long time goal of mine, and I hope to represent my team well this season.

Another great change is the new invite system that Pokemon has unwrapped. It is a point of complaint for many of the worlds-caliber players, but for me I see it as an opportunity to have more fun with the game as the race for the points is not as stressful. Instead of playing only consistently and striving for points, after I attain my invite, I can start playing things that are risky and strictly a meta call. Furthermore, I have never written an Expanded article, mostly because I saw Expanded as a chore to play with all the broken combos that can be created with such an expansive library of cards. However, owing to the recent bans at the beginning of last month, Expanded has evolved into a format that I am excited to play again.

In this article I am going to give a brief overview of the new and improved Expanded format, followed by the two decks I have explored the most in this new environment: Gardevoir-GX and Volcanion-EX / Turtonator-GX.

Jumping Back Into Expanded

The reason the Expanded format has become so refreshing is ban of two toxic cards: Archeops from Noble Victories and Forest of Giant Plants. Those cards had molded the Expanded format to be heavily dependent on the coin flip at the beginning of the game. The abundance of consistency cards in the Expanded format are a double-edged sword. They make the game extremely fun when your strategy is easily accessible, but is extremely frustrating when going up against a strategy that locks you out of the game turn one. Turn one Item lock is greatly facilitated in Expanded. When a deck focused on setting up Vileplume with Forest of Giant Plants has access to Shaymin-EX, Tapu Lele-GX, Battle Compressor, Revitalizer, Trainers' Mail and Computer Search, the game can become too one-sided. In addition to Vileplume, Tsareena from Sun and Moon when combined with Devolution Spray, extreme consistency and Forest of Giant Plants can also force your opponent to start with a completely useless hand. There is a counter to this, but the counter is just more of the same. Decks focused on evolutions completely fold when their opponent is capable of a turn one Archeops via Maxie's Hidden Ball Trick. This gimmick completely eliminates powerful evolution based cards such as Greninja BREAK and Gardevoir-GX from contention.

With the ban of these cards and the addition of Garbodor, Gardevoir-GX and Espeon-GX to the Expanded format, we now have a healthy, diverse meta where no one deck is too powerful. The all-mighty Night March has counters such as Karen and Oricorio to keep the deck more fair than before. Tapu Lele-GX, Giratina and the prevalence of Garbodor creates a situation where Trevenant is not nearly as powerful as it seems to be. Even Turbo Darkrai-EX can have a rough time when Marshadow-GX is splashable in any deck with adequate basic attackers.

However, because Expanded has an extensive library of powerful Trainers and Pokemon, the meta is almost impossible to define. There might be a meta-defining combination out there that the community has yet to find. This is what makes Expanded exciting for me, but terrifying for others. I don’t think it will be uncommon to face nine different types of decks at an Expanded Regionals, just because of how many different decks can do well at a Regionals. Therefore, when I’m going for a good, consistent finish at Regionals, I tend to build my deck with cards that allow you to handle almost any bad situation while maintaining a healthy deck consistency. While on this topic, something I want to bring up is choice of Ace Spec. There are only three Ace Specs that I can even consider to be somewhat competitive in this format: Computer Search, Dowsing Machine and Life Dew. Each of these have their niche uses, and when choosing an Ace Spec, you should heavily consider its utility in that deck.

The most fun of these, Life Dew, is only useful in decks that force your opponent to take multiple one-Prize knockouts. Life Dew in the past has been popular in decks like Vespiquen / Flareon (as featured by Dalen Dockery’s Ft. Wayne Regionals 2nd place run), Night March (as can be seen here in Connor Finton’s Night March deck list), and Tool Drop. However, because the meta includes Garbodor from BREAKpoint, players have adjusted by opting to play multiple copies of Tool-removal cards. This makes Life Dew much less potent as a game-changing tool. However, if your deck abuses Puzzle of Time or Eco Arm, reusing Life Dew can make a frustrating game for your opponent. 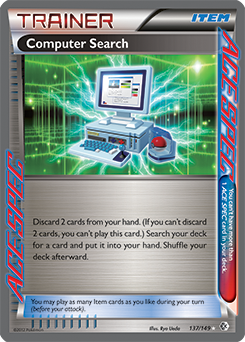 Computer Search and Dowsing Machine are the more competitive options and are found in any other decks. They both share a similar utility, but I chose between them based on the tempo of my deck.

Decks with early game pressure have synergy with Dowsing Machine over Computer Search so that they have more resources to be able to reach the goals they need. My general rule of thumb for Dowsing Machine is if you are playing multiple copies of Battle Compressor, then Dowsing Machine is the Ace Spec for you. Decks that have extremely easy setup benefit greatly from this Ace Spec over Computer Search. For decks like Turbo Dark, Volcanion-EX / Turtonator-GX, and Night March, your early game is typically spamming Item cards and Shaymin to set up as quickly as possible. These decks are focused on over-extending early game. As a result, Dowsing Machine fills a void where you can have that fifth Dark Patch/Max Elixir, secure the game with a Fighting Fury Belt, or to act as a fifth VS Seeker.

Computer Search is for slower decks, to give them the kick-start they need to be able to handle early pressure. Computer Search can be used at any time during the game to grab anything out of your deck. This is great for decks that require something typically unsearchable turn one such as a Special Energy or a Stadium etc. Because of its early game utility, Computer Search is a much better tool for decks that need to set up as fast as possible. Most older players would agree that the previous sentence is contrary to deck building dogmas of the past, but since the reprinting of VS Seeker we have near infinite access to Supporters and so the gap in consistency is near the beginning of the game. Decks that typically would prefer Computer Search are Seismitoad-EX variants, Gardevoir-GX/Metagross-GX, Primal Groudon-EX, Carbink BREAK variants, etc. In these decks Computer Search gives you another out to those pieces you need for your puzzle, whether it guarantee the turn two Rare Candy, provide a DCE or Strong Energy, or just to find a turn one Supporter.

The two decks I am using to illustrate this point are Gardevoir-GX and Volcanion / Turtinator. Gardevoir-GX is all about setting up a 230 HP high damage output monster that completely wipes your opponent’s board, whereas Volcanion / Turtonator tries to end the game with Blacksmith and Shaymin as fast as possible. Without further adieu, here is my Gardevoir-GX list.

Expanded Gardevoir-GX is something that I think most people know about, but do not highly consider when choosing a deck for Expanded Regionals. Gardevoir-GX is one of the most powerful attackers ever printed. Even as a Stage 2, there are a lot of tools to get evolutions out consistently. Gardevoir also has the space, when built with correct priorities to handle any situation as I mentioned before. The list may seem to have strange cards, but I believe these are necessary to have a deck that can handle the jungle that is an Expanded Regional.