Hello everyone! This is Grant Manley here and I am excited to bring you guys an article after my summer off from writing. Today I’m going to talk all about the Expanded format. The recent Ft. Wayne Regionals was the first major Expanded tournament of the season here in the U.S., and it reached over 800 total players in the Masters division! This is absolutely unheard of for a Regionals, and it is exciting to see these events keep growing. At this time last year, we thought 600 players in Florida was insane! I wonder when TPCi will learn how to scale prizing… but that’s a topic for another time. 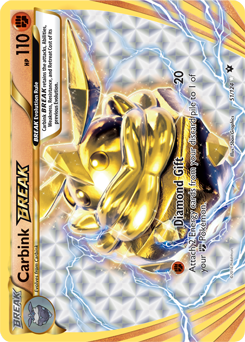 Anyway, both Ft. Wayne and the upcoming Daytona Regional Championships use the Expanded format. Sidebar, Hartford is the next Regionals and will be played in the Standard format. At Ft. Wayne, I played Carbink BREAK / Lycanroc-GX and finished 28th. This isn’t bad considering how many players were there, but I know I could have made Top 8 if I played things a little better.

As you have probably heard by now, the Expanded format was just hit with two significant bans: Forest of Giant Plants and Archeops. I could not be more ecstatic to see Forest go. On the car ride to Ft. Wayne, on September 1st, I celebrated Forest’s death day. That was the day it rotated out of Standard. Now, with its ban in Expanded, I have high hopes for the format. Archeops is a card that I couldn’t care less about. I don’t think Archeops hurt the format, but I certainly don’t mind its absence.

Both of these bans help out my pet deck, Carbink, a lot. I chose to play Carbink because I personally like the deck a lot and it seemed to have good matchups. I also wanted to beat Darkrai decks badly, as I correctly predicted that it would be one of the most popular decks. Here is the list that I played in Ft. Wayne.

This deck has been around since November of last year, but the format has changed since then and forced the deck to change with it. This deck cannot afford to play as passively as it could in the past now that most decks don’t simply lose to Carbink. Instead of tanking and using Carbink as a win condition, Carbink BREAK is now used almost exclusively as Energy acceleration. Of course, some decks like M Rayquaza-EX still lack an answer to Carbink, but for the most part you will have to attack with something a little more powerful. The strategy for this deck is to use Carbink BREAK accelerate powerful attackers, kill stuff with said powerful attackers, and deny Prizes like it’s your job (which it is).

Lycanroc-GX happens to posses a broken Ability and a GX attack that usually one-shots whatever you want at any given time; Landorus-EX offers snipe damage that adds up quickly and applies crucial pressure to evolution based decks; Land’s Judgement is also your most powerful attack besides the GX attack. I included Zygarde-EX because it does decent damage for two Energy and heals itself. This niche is especially useful against Trevenant and Garbodor decks. Giratina makes the Trevenant matchup favorable, which is neat. Focus Sash and all of the healing cards make everything extra durable. Pretty much no deck can actually handle the Prize denial that the healing cards impose.

Because there was a Golisopod-GX deck running around that ran only Special Energy, I chose to slip in a Xerosic and an Enhanced Hammer the night before the tournament so that I could run that deck out of Energy and win that way. I didn’t end up facing Golisopod, but still used those techs every once in awhile. Muscle Band makes Landorus even more imposing against pre-evolved Basics, lets Carbink apply real pressure, and is overall just a fantastic card.

Needless to say, I was not happy about my day two performance. In game two of round 11 I lost instantly against Blastoise. I ended up tying that one overall. That tie knocked me into the Espeon / Garb match that beat me in a close series. I have only myself to blame for the losses in rounds 12 and 13. I didn’t do anything overly stupid, but I just felt like I could have played a lot better and won both of those matches. My round 14 opponent absolutely destroyed me as he drew perfectly and I drew terribly. There was nothing I could do about that one. Round 15 was irrelevant in every way, so my opponent and I just ID’d.

I don’t actually know how good this deck is going forward. I have no idea if I will play it at Daytona. I think it is the most difficult deck to play optimally over an entire tournament in the history of the game (or at least since I’ve been playing). The deck requires a ton of practice unless you are Sam Chen. You are constantly faced with new situations and always have different resources to work with. I do think the Trevenant matchup is the most linear and easy to play against, followed by Darkrai and Rayquaza. Against anything else that has a realistic shot of beating Carbink, the games are tricky to play. I still haven’t figured out the Espeon matchup, though I believe it to be slightly favorable. Also, this deck draws bad a lot. You just have to deal with it and win anyway.

Now I want to talk about M Gardevoir-EX. I very nearly played this deck at Ft. Wayne, as it was my second pick. I think Gardevoir is a stupidly good deck right now and it is definitely on my radar for Daytona. Here is the list.

2HKOing everything while spamming Max Potion and Hex Maniac is apparently a good strategy. This deck is a little clunky but it is absolutely amazing anyway. The only attack you use is Despair Ray, and you use Pokemon like Shaymin-EX, Hoopa-EX, and Jirachi-EX to go through your deck quickly and find everything you need. Despair Ray wipes the one-use Pokemon from the Bench, and Dragonite-EX, Karen, and Super Rod get them back, and so the cycle goes. M Gardevoir-EX is tough to OHKO, so the deck takes advantage of Max Potion to erase attack after attack while wearing down opponents with Despair Ray. Dimension Valley allows Gardevoir to attack for only one Energy which lets it abuse Max Potion. 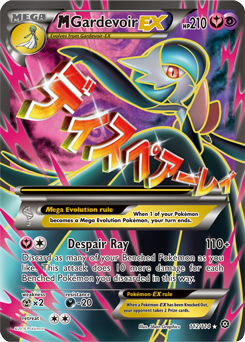 The techs you see are counters to decks that could normally OHKO M Gardevoir-EX, thus ruining your entire strategy. Sudowoodo helps against Rayquaza and Darkrai by limiting their Bench. Klefki reduces Darkrai’s damage output. Comfey blocks the ever-annoying Hypnotoxic Laser and Malamar-EX‘s Hyper Hypnosis, which in turn blocks Darkrai-GX‘s Dead End GX attack. Karen resets Night March’s damage output, and it is incredibly difficult for Night March to reach 210 over and over when it has to start from scratch multiple times a game.

Wonder Energy is a neat little inclusion that blocks attacks such as Shell Trap, Dead End GX, Silent Fear, Psybeam, and Divide GX. It is better than Basic Fairy Energy in most situations, though you can’t put it back with Super Rod. Let’s look at Gardevoir’s matchups against the top decks from Ft. Wayne. I’ll go over Gardevoir’s matchups quickly because I have a lot of experience playing against some of them and I think Gardevoir has amazing matchups. However, I won’t be doing this for every deck I discuss today because I just don’t have as much experience with them as I do with Garde.

Darkrai is a favorable matchup, but even with all of the techs, it’s not as easy as you might think. Once Dark Pulse gets up to 250 damage (210 after Klefki Resistance, enough to KO Gardevoir), things start to go downhill. It is just a matter of when that many Dark Energy hit the board. Before then, you can Max Potion off any other Dark Pulses. Yveltal is surprisingly annoying, especially because you cannot KO it if it has Fighting Fury Belt. You definitely want to find Klefki as soon as possible, then Comfey. If you cannot Hex them early game (which you should try to do), at least try to find Sudowoodo. Hex is less important than Klefki late game, but early Hexes are certainly your friends, especially when going first. You also want to have Wonder Energy in play whenever possible. Darkrai can Hex Laser for Dead End around Comfey, or you may just not have Comfey in play at all times. However, regardless of Comfey, Wonder Energy will always block Dead End GX.

Like Darkrai, this matchup is not as easy as it seems on paper, but it is still in Gardevoir’s favor. The matchup really comes down to when you can use Karen. In a perfect world, you use it on every turn, but that doesn’t happen in practice. As always, a turn one Hex going first is busted. Gardevoir is difficult for Night March to OHKO and you can Max Potion away any Night March attacks that don’t land the OHKO. There aren’t any huge strategies, just use Karen and try to put yourself in positions where you can access Karen on crucial turns.