Hey, everyone! It’s still a couple of weeks after the fact, and yet my run at the 2017 North American International Championship still feels so unreal. All the same, I want to make the most out of that experience for you guys, and so today I’ll be going over some of the biggest realizations or changes I’ve made this season over previous years. We’ll keep the topics simple, but go pretty deep into each of them: good habits at big tournaments; general approaches to big tournaments; and of course doing better for the next tournament. Finally, I’ll close with a few thoughts on what improvements I made to make this season a real comeback for me.

(Spoiler alert: I’ve had to do that last one a lot!)

Myself and others have talked good habits to death in past articles, but there are some which become especially important in the context of big Pokemon tournaments. I’ll admit that my experience playing other card games is limited, but I’m going to keep this as focused on the special problems I’ve found associated with the peculiarities of Pokemon only.

Even Though the Schedule is Tight, Don’t Skimp on Food or Hydration!

Most Regionals and International Championships are a real multi-day marathon. In addition to tons of games and matches, the schedules have zero dedicated time for lunch breaks. Considering how difficult it can be to finish a best-of-three match in 50 minutes, you have precious little time to dedicate to core things like eating and water. 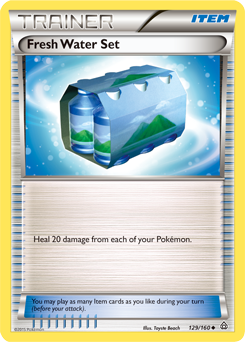 Nevertheless, you have to do it. This is probably going to be the most tiring and over-written piece of advice, but the reason you see it over and over again is because it can’t be emphasized enough. I probably refilled my water bottle no less than a 15 times throughout the weekend in between matches, and I certainly took advantage of Bee’s coffee shop right across the street from the convention center. Even if you don’t have time, or don’t expect to have time due to your deck choice (looking at you Sableye / Garbodor), then it certainly wouldn’t hurt to pack snacks you can quickly devour in between rounds. Back when I was in college and went to tournaments, I would frequently bring all sorts of funny things with me, to the point where some people thought it was a personality quirk.

There are so many things which realistically you’ll have trouble with if you see the end of a big tournament: sleep, other peoples’ hygiene, nerves. However, you certainly can control your intake of the most basic of necessities, and all you need is to be dedicated to doing it.

The Fewer Earth-shattering Changes You Make, the Better

There’s a reason why we call it a “habit”: because it’s something we know on a routine basis, and may not even have to think about.

Perhaps the most important habit we as players would benefit from is staying in our comfort zones headed into a big tournament, and the most important subset of this habit is making grounded deck choices. The way I understand a player’s performance at any given event is with a “floor” and a “ceiling” — that is, how bad or how good they can do. Of course we all want our ceilings to be first place, but ideally we also want an elevated floor record, such as something on the bubble or within Championship Point territory.

However, year after year many players confront a cold reality: that their ceiling is, in all likelihood, not first place, and whatever you had been testing — while good — is going to struggle. You then face the unenviable task of either sticking to your good-but-not-quite-good deck, resulting in a lower ceiling but higher floor; or you switch decks, resulting in a marginally higher ceiling but a floor that almost goes far beneath the Earth.

Recently, I enjoyed the chance to address my horrible Nationals showing in 2009 in which I faced this exact problem. I had been furiously testing a straight Luxray GL LV.X deck, but when I got to St. Louis the night before, was confronted with a very difficult matchup to Luxray GL / Infernape 4 LV.X. I threw away all my hard work on the Luxray deck, switched to a bad Luxray / Infernape list, and did appropriately bad that tournament! Yet the most frustrating thing for me to see was that, while Luxray / Infernape won the whole thing, the runner-up list was almost identical to the straight Luxray build I had been working on! While I certainly could have used a better Luxray / Infernape list, I would have been much better positioned to get second that year had I simply stuck to my guns.

Fast-forward to 2017 Internationals, where I encountered a similar problem yet took a different path. Although Decidueye-GX / Vileplume certainly had first place as its ceiling this tournament, it’s arguable that Garbodor and Zoroark had a greater probability of winning going into the event. For that reason, it’s a similar situation wherein I had a solid chance of going deep, yet a risk of getting undone by Garbodor. While that is indeed what happened, I still tore through many Garbodor decks throughout the weekend, including a card-for-card copy of the champion’s winning list.

In so many words, I avoided unnecessary changes, and it worked out. I didn’t freak out and make a weird list, alter the formula, or anything — I went with old faithful, and it paid off. No weird techs, no awkward Mallow engines. Just good, old-fashioned, obnoxious Item-lock.

But there are also lots of other changes you should avoid aside from deck changes. For comfort’s sake, don’t start using new things like new play mats, dice, bags, and so on. If you’ve never slept on the floor in a 10-person room to save some money, then an International Championship is probably not the best time to start doing it! It’s a long weekend, so don’t start stressing yourself out with a bunch of wild, new choices — especially if you’re not a very change-friendly person in the first place.

Big tournaments are their own animals: mistakes are magnified; your games get put on YouTube for all eternity; a ruling can surprise you. While several of us are informed enough to report on the struggles of big tournaments, their structure and design have forced me to improve my game dramatically over the past few months, so the experiences of good and bad choices are all fresh in my mind.

As is the case in any level of play, but perhaps no more important than in a high-pressure event, you need to get over your mistakes, and don’t let them jade your whole tournament. In this season alone I’ve played against multiple top tier players who made game-losing mistakes against me. However, these players ignore the criticism, the haters, and the Monday morning quarterbacks, and are the name players you recognize today because they have a healthy way of approaching their imperfections. I’m doing my best to follow this example, and can think of an instance at Internationals when it paid off:

In the second game of round 13, I made a devastating gameplay error: I illegally filled up my Bench to five Pokemon against a Sudowoodo, and neither my opponent nor I caught the mistake until the judges brought it to our attention. It was a tense few minutes as the judges conferred on what would be the best penalty to issue, but rather than beat myself up, I spent the time gathering myself. In my head I:

The penalty determination was important because I could already start thinking ahead to what was needed to win the third game: an above-average speed of play for me plus zero room for error. Likewise, it was important for me to address how I felt so I could be in the healthiest mindset possible to achieve that game three goal. I felt anxious and frustrated, but rather than let that anxiety and frustration bleed over into the third game, I calmed myself down while waiting on the final penalty (I was right — it was a Prize loss), and executed the third game almost flawlessly. Had I freaked out, I might not have made Top 8 or finals, but instead I sucked it up and carried on.

Of course you can’t be bullheaded and ignore your misplays; otherwise, you risk making excuses for them. This sort of mindset is toxic, and is one of the easiest ways to lose respect in the competitive community. But there is a time and place for post-game analysis, and it’s usually in the comfort of your own home, away from the noise and fanfare of a competitive event.