Hello everyone! It’s about to be crunch time for those points! As this season’s League Cups and the third International Championship come to a close, we only have a handful of opportunities to snag Championship Points for a World’s invite. Not to brag, but I am currently at 442 Championship Points, so I am not too worried. I probably would have earned my invite earlier, if I had attended more Regionals and League Cups this year, but I valued my time at home relaxing instead. Top 16 is also something I kind of wish I had striven for, but it adds a level of extra stress on tournaments and forces me to play at tournaments that would be inconvenient for my schedule. At the least, I will attend local League Cups, Madison Regionals, and the upcoming Virginia Regionals.

At the point of me writing this, you know how good your chances are at getting your invite. If you fell short this year and are serious about getting it next year, consider traveling to International Championships. They may be expensive, but they pay out really well to Top 64. Top 64 earns $500 and 60 points. If you strive to do that at every International, you will have half of your invite in the bag. If I went to all of the previous Internationals that were available to me, I would be close to the Top 16. If you cannot afford to do that, the only option for you is to play better or to go to other tournaments. My advice here, aside from reading literature, is to dedicate tens of hours to practice with better players. From my first mentor with Philip Barta to my current Monstar team, I’ve always had partners. Test with people you don’t want to sit across from at a tournament so you can prepare for facing the worst.

I have written this article in hopes of helping you achieve your performance goals for the tournaments in the near future from League Challenges to your next Regionals. To help, I have an assortment of topics to discuss instead of a single focus. First things first, I want to briefly discuss the state of the Standard meta with a short interview with Connor Finton who made Top 4 in the International Championship at Sao Paulo, Brazil. Then I want to discuss my current Volcanion and M Rayquaza-EX / Gumshoos-GX lists for Standard. Finally, I will wrap up with a look into what I think will be a strong contender rising from the next set: Garbdor (GUR) / Salazzale.

Connor Finton is a rising star in the Pokemon TCG. He joined my team, the Monstars, around the beginning of 2016. Since then, he started dominating large tournaments and has become an invaluable testing partner. He is currently second in North America for Championship Points, even though he has only recently learned how to win a League Cup! I asked him for a quick interview after his excellent finish in Brazil, and he was kind enough to help me out.

For those who don’t know the wonderful Connor Finton, tell us about yourself

She’s got all of the right curves.

What were your matchups during Brazil?

It seems like your only losses were against Decidueye / Vileplume, and that there was a lot of it at the tournament! Do you think it was your hardest matchup?

By far the hardest matchup over the course of the tournament was the Decidueye-GX / Vileplume mirror. In fact, it was the only matchup I lost.

What are Decidueye’s easiest matchups?

In general, I think that Dark variants are very favorable, especially with Tauros-GX in Decidueye.

What do you think is Decidueye’s hardest viable matchup?

I really want to say the mirror. I’d honestly rather play against almost anything other than the mirror. That being said, whenever you sit across from a Volcanion you feel a little shaky.

Most players have taken Tauros-GX out of their lists. Why have you decided to keep it? 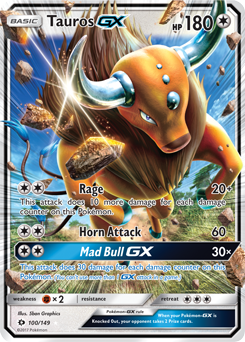 Tauros-GX was the MVP of the tournament for me. Forcing your opponent to deal with Tauros under Item-lock, while you are putting on pressure with Feather Arrow is super good.

Garbodor is a problem for Decidueye / Vileplume, however, you didn’t play any. Do you think Beedrill-EX worth it?

It honestly depends on the meta. For Brazil it wasn’t worth it, and my only relevant attack with the card was a Pin Missile to donk Groudon-EX early in the tournament.

One notable count is your Lysandre count. Why the three Lysandre?

Lysandre is one of the best cards in the deck. One Lysandre on a heavy retreater is often a win condition for Decidueye.

What do you think of Jolteon-EX and Regice in the deck?

I personally think that the straight version is better. The Rainbow Energy version makes favorable matchups better. The biggest difference is the Volcanion matchup, however, that matchup is already very winnable. I think it just suffers a bit too much with a loss of consistency. It also has a worse matchup versus the mirror.

A fourth Grass Energy or a second Lugia-EX.

Any final comments on the state of the meta?

Decidueye is the best deck in format. There is honestly nothing right now that solidly beats the deck. That being said I’m hopeful that Guardians Rising will help to bring more diversity into the meta.

My Take on the State of Standard

I am in complete agreement with Connor Finton. I think Decidueye-GX / Vileplume is the unequivocal best deck in Standard. It has hard counters, like Wobbuffet / Aerodactyl and Lapras-GX, but these decks have trouble with the rest of the meta, and cannot meet Decidueye at the top tables often enough to stop it. Furthermore, Decidueye can actually beat anything if it goes first and has a devastating start. For this reason, my honest opinion is just for everyone to play Decidueye / Vileplume for the best results. Like Night March last year, it is clearly the best deck, purely because Item-lock and consistent chip damage is too strong. This is due to the way we build our decks. Most of our consistency comes from Item cards, specifically Trainers' Mail, VS Seeker, and Ultra Ball. The easiest fix would be to have a consistency engine less reliant on Items, but these engines are far less effective. Furthermore, the lists of Decidueye / Vileplume are evolving to counter the counters. Vileplume with Jolteon-EX or Regice is not new to the competitive scene since its big break at Worlds last year, but pairing them with Decidueye is something we haven’t had to deal with before. Not being able to attack your opponent while under the pressure of constant chip damage is not only crippling to the game state, but to the morale of the player.

If you do not want to participate in the toxicity that is this deck, I will offer two more decks for this short-lived Standard meta. In my previous article, I go in-depth on how to play against Decidueye / Vileplume and I bring up the weakness of Decidueye / Vileplume. Between Yveltal / Garbodor and Wobbuffet / Aerodactyl I covered Ability-lock, high Retreat Costs, and Energy denial. However, I never focused on the easiest strategy: overpowering your opponent. Two decks that focus on this strategy and have relatively high win-rates versus Decidueye / Vileplume are M Rayquaza-EX and Volcanion. In this article, I present builds of these decks with extra measures to fight without access to valuable Items.