Hey there PokeBeach readers! I’m back with another article, and this time I’ll be discussing three decks I believe have a lot of potential now that the newest set, Guardians Rising, has been released. Guardians Rising is one of the most game changing sets Pokemon has released in years; the entire format has basically been re-written. So, without further ado, let’s take a look at the three decks I believe have a solid chance of making a splash in this new meta.

The first deck I’d like to talk about is Sylveon-GX. As I’m sure many of you already know, Sylveon has achieved a ton of success in Japan, making the card extremely hyped on release for the rest of the world. As you can probably tell (I am writing about it after all!), I’ve bought into the hype. As someone who has enjoyed playing and pioneering Quad Lapras, Sylveon was the first deck I built when I saw the full set of scans for the set. With a beefy 200 HP, an attack that lets you search for any three cards in your deck for a single Energy, as well as a GX attack that can completely reset your opponent’s board, Sylveon promises to be the new king of disruption. Sorry, Lapras-GX! Let’s now take a look at my first build with Sylveon.

Please note that due to very little time between the release of the set and this article’s due date, I have not been able to fully test all of these lists. Thus, I will not be doing a matchup section for each deck, as I don’t want to misinform you all as to a specific deck’s matchups. Use these lists as great starting points, play with them yourself, and tweak them how you see fit!

Let’s go over the card choices here, as while this deck concept is similar to Lapras, it is still an entirely new archetype. 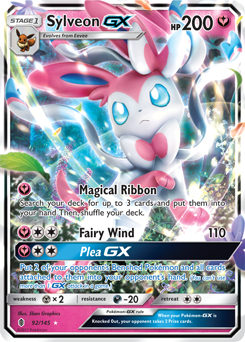 While most lists I’ve seen play a 4-3 Sylveon-GX line, I’ve opted for a full 4-4 line. This is mostly because I do not play Rescue Stretcher, but also to ensure I can get at least two Sylveon powered up per game, regardless of my Prize situation. Sylveon is the star of this deck, so not much more about this count needs to be explained.

One of the best things about Sylveon-GX is that it’s an Eeveelution, which allows it to abuse the AOR Eeveelutions that have the Ability to give Stage 1s an extra type. Lapras, a very similar deck, struggled heavily with Volcanion, as Volcanion quickly overwhelmed it with its speed. Thus, I’ve chosen to run a single copy of Vaporeon. This should allow you to keep up with Volcanion’s aggression, as you are able to OHKO everything in their deck once Vaporeon is in play.

As I said before, Sylveon is the new and improved Lapras, so it makes sense to keep the main Supporter count the same from deck to deck. Team Flare Grunt is your main disruption Supporter, and N is your go-to for disrupting their hand as well as your best draw out although you don’t really need to draw much because you can literally search for whatever three cards you need every single turn. Have I mentioned I like Sylveon yet?

This is standard in every single deck. I’m  not going to spend any more time on this section.

One thing you’ll notice is that I’ve chosen to play two Delinquent in this list, compared to just a single copy in Lapras. This is mostly due to the fact that I saw a very famous Japanese player post his list from a recent tournament, and he played a full four copies of Delinquent. While I wasn’t ready to go that far, I did incorporate his idea into my list by adding a second Delinquent. Japan has been playing with Guardians Rising for a while already, so it would behoove me to not take heed from their lists and incorporate some of their ideas into mine.

Delinquent is absolutely incredible in Sylveon because you can search it out at any point in time with your first attack. Every time you use Magical Ribbon, your opponent is forced to play around a potential Delinquent the next turn, especially so if there is already a Stadium in play. Delinquent in general got a huge buff thanks to Sylveon and Tapu Lele-GX, which both allow you to search for it instead of needing to draw into it. Expect to see Delinquent in nearly every deck now, and get used to playing around it or you will be punished.

Unlike Lapras, we don’t play Wobbuffet, so Hex Maniac goes from a tech to a staple. While Sylveon does have its GX attack to reset Decidueye’s board (and should have a very solid matchup against it like Lapras), giving yourself a searchable out to Item-lock is too good to pass up. Hex Maniac also helps out against explosive decks like M Rayquaza-EX and Volcanion, as you can slow them down enough to make them play the game at your pace.

In Lapras, I chose to play two Team Skull Grunt just to make sure I drew into it under Item-lock against Decidueye once they used Hollow Hunt. In Sylveon, you don’t even need to rely drawing into it, as you can just search for it the turn before you need to play it. Do not use this card early against Decidueye, as if they set up Item-lock before you are able to get this card back with VS Seeker, you’ll be forced to burn Hex Maniac to retrieve this card, setting you a turn back on when you can use Skull Grunt against them.

This card is so good. Originally, I didn’t have this in my Lapras list for Puerto Rico (because I could not find any on the island), but after adding it to my list, I realized how ridiculously good this card is in a stall deck. Team Rocket's Handiwork works just as well in Sylveon-GX, allowing you to mill your opponent while discarding their resources on board. Handiwork is useful at all stages of the game; early game you can use it and potentially hit some of their important Pokemon or Items (for example, against Turbo Darkrai at a League Cup, I hit double Heads and discarded three of my opponent’s Darkrai-EX and on the next turn her Super Rod, instantly winning me the game), or late game to deck your opponent out.