Hey there PokeBeach! I’m thrilled to be back writing another article for you guys. Around three weeks ago, I traveled to Puerto Rico to compete in the Puerto Rico Special Event (which I highly recommend everyone consider going to in the future), and ended up making Top 8 with Quad Lapras-GX. Since then, the deck has picked up a lot of interest in the community, however there hasn’t been an article explaining the deck in detail. So, that is what I’ll be doing here today! Without further ado, let’s just jump right into the article.

While many of you probably already know what this deck’s basic strategy consists of, I’ll quickly go over what Quad Lapras aims to do. Quad Lapras is very similar to Wailord-EX decks of the past, in that it relies on big, beefy, Water-type Basics that can tank multiple hits while you disrupt your opponent with a bevy of disruption Supporters and Items. The thing that makes Lapras significantly stronger than Wailord is its ability to attack; if your opponent is ever able to load up a threat even through your disruption, you can just Ice Beam GX and then Blizzard Burn in order to take out their threat. Now that the basic strategy of the deck is out of the way, let’s take a look at my current list.

This is the list I took to my most recent League Cup, losing in the finals to Kevin Baxter playing Volcanion. This list has a good amount of differences from the list I posted three weeks ago, as I’ve really refined and optimized the list since then with a lot more testing. Let’s take a look at what each card offers and why I’ve chosen to play the cards I did. 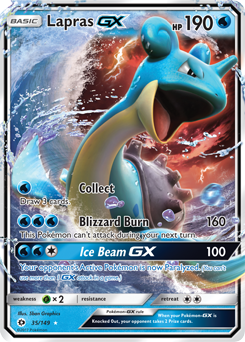 Lapras-GX is the star of the whole deck, as all three of its attacks are incredible for different reasons. Collect, Lapras’ first attack, is what makes the deck really click, as it allows you to build your deck with so many disruptions cards without needing to worry too much about consistency, as Collect provides that consistency for you. Blizzard Burn is fantastic at removing threats, as with a Fighting Fury Belt and Professor Kukui you can Knock Out any non-Belted Basic Pokemon-EX in the metagame. Finally, Ice Beam GX is perfect for neutralizing whatever threat your opponent is able to set up even through all your Energy denial, as you can Ice Beam followed by a Blizzard Burn to KO it while they’re unable to attack you. Combined with an absurd 190 HP (230 HP if you have a Fighting Fury Belt) as well as Rough Seas, Lapras can tank a ton of hits, allowing you to stall as much as you need to until you are able to set up; very few decks can consistently one shot Lapras.

This card is so incredibly good as a one-of. You would rather not start with Wobbuffet given the choice, since it can’t use Collect; but if you do happen to open it (which is a 16% chance), you slow down every other deck in the format, as they are unable to use Shaymin-EX to set up. This gives you enough time to set up your Lapras’ in the back while continuing to disrupt your opponent with your disruption cards. Wobbuffet is also incredible against Decidueye-GX; it forces them to use their Feather Arrow on Wobbuffet instead of Lapras-GX, allowing your Lapras to be able to survive their Razor Leaf, as well as giving you access to all your disruption Items when you promote it once they put Vileplume down. Finally, by only playing one Wobbuffet, your opponent is desensitized to KOing it, as it is essentially a useless Prize as they’ll still need to Knock Out three Lapras-GX to win.

Lapras is a disruption deck, so why not play four of the best disruption Supporter in the game? I was toying with three Team Flare Grunt for a while, but going second this is almost always the Supporter you want to see in your opening hand, so playing four soon became a no brainer after some testing. This count should never be lowered in any circumstance.

Similar to Team Flare Grunt, four N is an absolute must. You rarely want to play Professor Sycamore because your hand size will always be very large, meaning you rarely want to Sycamore it all away. Thus, four N becomes absolutely necessary. Besides wanting to disrupt your opponent if they are able to take early Prizes, giving yourself a new hand of six (you rarely take early Prizes) and then being able to Collect your hand up to 10 (including your draw for the next turn) gives you plenty of cards to work with. N is strictly better than Judge as well because you want to give yourself a larger hand size in order to draw into two Puzzle of Time at the same time.

Every deck should play at least two Lysandre; the card is too good to not play. There’s not much more that needs to be said. 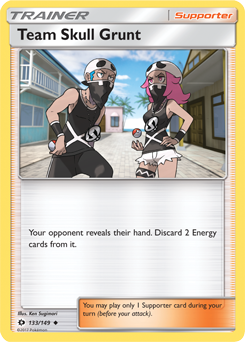 This is probably the only viable deck that can utilize Team Skull Grunt well, but boy is this card good in here. Team Skull Grunt works incredibly well in here for two reasons: you can afford to use it thanks to the inherent consistency provided by Collect, and because of Crushing Hammer you can cripple your opponent’s field as well as their hand in the same turn. Team Skull Grunt is also incredible against Decidueye-GX / Vileplume, as you can essentially render their Hollow Hunt GX useless with just one Team Skull Grunt. Finally, if your opponent ever tries to Shaymin-EX loop you (it’s not a viable strategy against Lapras, but I’ve seen it done), you can just Skull Grunt away their Energy and make them cry.

This is the biggest change in the list since my previous list. The more I’ve tested Professor Sycamore, the more I’ve come to realize that it just does not belong in Lapras. Lapras constantly has huge hand sizes and has cards such as Puzzle of Time that you just cannot afford to discard. At my League Cup this weekend, I decided to play one as insurance just in case I had unplayable hands, and I didn’t end up using, or even wanting, Professor Sycamore once. Playing one as insurance is totally acceptable, but this card is going to be cut from my next list in favor of another tech.

Hex Maniac is really solid against a lot of decks to slow them down (such as M Rayquaza-EX), but it really shines in the Decidueye-GX / Vileplume matchup. Like Wobbuffet, Hex Maniac gives you access to all of your disruption Items that you otherwise wouldn’t be able to play. Just one turn of being able to use Crushing Hammer and Enhanced Hammer against Decidueye sets them back so much. On top of that, you also get to shut off their Feather Arrow, giving you two free turns of Rough Seas healing.

Olympia is one of the best ways for this deck to reset Blizzard Burn as well as provide a little bit of extra healing. Lapras doesn’t rely too much on being able to stream Blizzard Burn, so only one Supporter spot is needed in the list dedicated towards resetting Blizzard Burn. This spot came down to deciding between Pokémon Ranger and Olympia, and Olympia was pretty clearly the better option. Besides being able to reset Blizzard Burn, Olympia provides the utility of being able to switch a Lysandred target, as well as the additional heal. These extra benefits, coupled with the fact that Lapras doesn’t struggle with Regice, Jolteon-EX, or Glaceon-EX whatsoever, made Olympia over Pokemon Ranger an obvious call.