Hello PokeBeach readers! This is Grant Manley here, and I am incredibly excited about the two Regionals coming up. I will be attending both Roanoke and Toronto Regionals in May, but for now I am only going to be discussing the Standard format in preparation for Roanoke. The Brazil International tournament just wrapped up, and it was dominated by Decidueye-GX / Vileplume. In fact, Decidueye decks have been performing consistently well in tournaments across the world ever since fellow writer, John Kettler, day two’d Anaheim Regionals. It’s safe to say that Decidueye is the format-defining card right now, and if you can’t beat ’em, join ’em.

Interestingly enough, Gyarados put up placements in tournaments, such as Salt Lake City Regionals and Brazil Internationals. Gyarados is a risky play because of its autoloss to Decidueye, but it still draws some competitive players because it can be built to have a favorable matchup against every other deck. At Regionals and Internationals, a record of 7-2 is safe in order to advance in the competition. As long as it can defeat every other deck, Gyarados is fine if it runs into less than three Decidueye decks. This is a risk that Sam Hough took in Brazil and it paid off during the first day. Unfortunately for him, day two of Brazil was infested with Decidueye decks, and there was no real hope of avoiding them. Tyler Ninomura played Gyarados in Salt Lake City and finished 10th. Gyarados has been shown to be a viable deck. In my opinion, Gyarados is fun to play and its matchups aside from Deciudeye are phenomenal. I will discuss this deck in more detail a bit later.

The other two decks that I will cover are Yveltal-EX / Garbodor and the aforementioned Decidueye-GX / Vileplume. I am a bit partial to Yveltal because both of my League Cup wins during this quarter came from it. I truly do believe that Yveltal has the potential to beat everything in this format (besides maybe Gyarados), and it is a consistent deck that has proven itself time and time again. Decidueye took three of the Top 4 spots in Brazil, which is actually insane. It is too strong of a deck for me to ignore in this article.

I can’t recommend this deck as a play for Roanoke. However, it is an incredibly interesting deck because of how strong its matchups are outside of Decidueye-GX. If you are going to Roanoke and want to make day two, play Gyarados if you think you won’t play against three or more Deciudeye decks. Aside from that, it is a strong deck all-around in Standard, and it can take down some League Cups. My good friend, Eddie Sitavi, is the Gyarados master and has been playing it at League Cups. He’s gotten a first and a Top 4 with it, and many of the list decisions were made with his help. 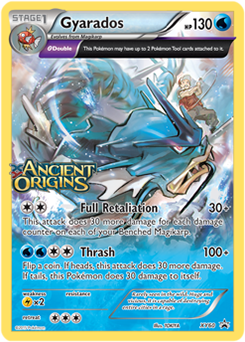 In case you are unfamiliar with Gyarados, it is a non-EX with a nice chunk of HP that OHKOs just about everything in the format for just a Double Colorless Energy. It is basically a better version of Vespiquen. The entire deck is built around getting a fast and consistent stream of Gyarados going. It uses Team Magma's Secret Base to damage Magikarp, which makes Full Retaliation do a ton of damage. The deck gained a tremendous amount of hype going into Orlando Regionals in the early months of the season, and it performed alright. It also picked up some last-minute fake hype before Athens Regionals, and nobody really played it. Let’s look at the card counts.

Four Magikarp is absolutely necessary, and four Gyarados is debatable. Three Gyarados is largely accepted to be the optimal count. This is because your opponent will likely not KO Gyarados every turn, so you don’t always need to stream them. Knocking Out Shaymin-EX or Octillery is usually more important than going for Gyarados every turn, and going for Magikarp is significantly easier. This deck also plays an absurd amount of recovery cards, so there is no real need for the fourth Gyarados.

Octillery provides a strong source of consistent drawpower. You constantly need to replace your attackers, Karps, Energy, and Stadiums. Octillery helps you find Teammates, Puzzle pieces, and the cards themselves in order to make constant Full Retaliation attacks a frightening reality. It is almost like a free Shaymin-EX every turn!

Klefki greatly helps against M Mewtwo-EX and M Rayquaza-EX decks. Even against Mewtwo decks running Espeon-GX, Klefki allows you to still have a favorable matchup. This is merely a tech for a couple of relevant meta decks.

Shaymin-EX is used for the same reasons as Octillery. Shaymin draws an extra card, and it can be used alongside Octillery. Shaymin is particularly useful on those turns where you need to pull of a ridiculous combo in order to take a KO with Full Retaliation. Those kinds of turns happen quite often with Gyarados, and Shaymin is the reason why crazy combos are easy to pull off. Shaymin can also use Sky Return to set up KOs and remove itself from the board. In fact, starting with Shaymin is quite often optimal if you are going second, as it allows you to Sky Return on turn one for a free 30 damage. After all, there aren’t any other attacks that you’d like to be using on your first turn when going second.

This is an unusually high count of draw Supporters for a Gyarados deck. Gyarados decks usually run less draw Supporters because they are completely unnecessary later in the game. Later on, Gyarados will be using Lysandre, Teammates, or Professor Kukui in conjunction with Octillery, so the need for N and Professor Sycamore is not there. However, this deck can really struggle in the early stages of the game, so I included high counts of draw Supporters to make the deck as consistent as possible early game. I cut the two copies of Lucky Helmet that most lists run in order to make space for these Supporters. Lucky Helmet is an unnecessary card that I do not find useful. Of course, N is a powerful weapon late game too, so it isn’t completely useless past the opening turns. 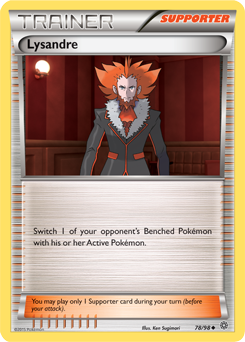 Two Lysandre is pretty much standard. There’s not much to say about it. Since Gyarados can OHKO most things without Professor Kukui‘s help, Lysandre’s ability to choose what you OHKO is awesome. It lets you remove threats at will.

Teammates is amazing in this deck, especially with Puzzle of Time. Teammates helps you find whatever you need during your turn, as long as one of your Pokemon was Knocked Out last turn. It creates win-win scenarios. If you get KOd, you get to search for any two cards. If you don’t get KOd, your healthy and happy Gyarados can keep on swinging.

Ultra Ball can grab any Pokemon and it lowers the hand size for Abyssal Hand and Set Up, so it is undoubtedly the best Ball. Dive Ball searches everything besides Shaymin-EX and Klefki for no cost. The only difference between Level Ball and Dive Ball is searching for Klefki or Gyarados. You could easily run four Dive Ball and no Level Ball. You might also consider running a Rattata, in which case Level Ball is a definite one-of.

These are recovery cards that allow you to stream high-damage Full Retaliation attacks every turn. You use these cards to retrieve whatever you need at the time. Buddy-Buddy Rescue usually goes for Magikarp or Gyarados, and Puzzle of Time often gets back Team Magma's Secret Base, Double Colorless, and VS Seeker. These cards are extremely crucial for the deck’s success, and you should not consider running less than four of each.

Escape Rope is useful in case you start with Remoraid or Klefki. It can also be used if your opponent tries to Lysandre-stall you. It isn’t a terribly important card but you do want to have the option to use it sometimes.

Some people play Town Map instead, and I was one of them. My friend Eddie convinced me that Rotom Dex is actually better. With all of the draw and search cards in the deck, it is easy to use Rotom Dex and pull the card you wanted from the Prizes on the same turn. With Town Map, you have to wait a turn, find a way to take a KO, and hope your opponent doesn’t N you. It is also difficult to find KOs in the first place if you have a Magikarp or two prized.

One Special Charge, One Super Rod 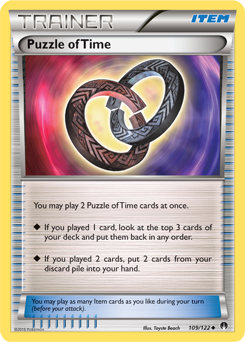 So this deck plays a lot of recovery. These cards recover important resources. Thanks to them, you can spend your Puzzle uses on other important cards like Magma Base and VS Seeker more often.

The deck revolves around this Stadium, so of course you run four. Any less is unthinkable. You need to find Team Magma's Secret Base as soon as possible, and you need to play a new one down every time your opponent bumps it. Magma Base is literally the source of this deck’s power.

Most of Gyarados‘ matchups are alike. You stream Gyarados and kill everything. I won’t be going in-depth for these matchups because you use the same game plan in most of them.