Hey PokeBeach! Since I last wrote, Sun and Moon has entered the format, bringing some interesting additions and decks to the table. The second Internationals starts in less than a day, with players from around the world flying to Australia to compete. The large-scale tournaments of Anaheim and Sheffield Regionals have taken place in the Primal Clash – Sun and Moon format as well. This gives a solid foundation of what the metagame might look like for Oceania Internationals.

For this article, I’ll be starting off by looking at my run for Sheffield Regionals. This includes my preparation, my deck and the results. Afterwards, I will discuss the best options for Oceania Internationals, taking into account the possible metagames.

For me, my season has been slightly slower than my last. With Regionals being few and far between and spread out like never before, I’ve only been able to attend League Cups since Liverpool Regionals. Before Sheffield, I had a total of 160 CP, which is close to a third of the 500 I need for a Worlds invite this year. Getting a Top 8 or better placement at Sheffield would give me the Championship Points and resources to make it worth trying to obtain an invite for Anaheim. Speaking of Anaheim, the main decks which should be popular at Sheffield are usually defined by the Anaheim Regionals two weeks prior, so let’s have a look at the results.

The other interesting things we can see are the Top 32 trends. The most popular deck, with seven total spots, was Turbo Darkrai-EX. This shows us that Turbo Darkrai-EX decks were both heavily played and consistent. The deck has a consistent engine using Max Elixir and Exp. Share to gain and keep Energy in play, while Darkrai-EX’s Dark Pulse attack hits high numbers once five or six Darkness Energy hit the field. Two Turbo Darkrai-EX also finished in the Top 4 as well, showing that this would most likely be the deck to beat at Sheffield.

Coming in a close second with six spots in the Top 32 are M Mewtwo-EX / Garbodor decks. Also played in heavy counts on the day, M Mewtwo-EX surged into the forefront of the meta with the introduction of Sun and Moon into the format. M Mewtwo-EX decks are consistent with the powerful Psychic Infinity attack along with acceleration from Mega Turbo to make sure the deck can hit numbers. A new inclusion into the deck that I quite like is Espeon-GX. Even though the Pokemon is a Stage 1, Eevee‘s Energy Evolution Ability makes it possible to evolve and attack as soon as Eevee hits the field. 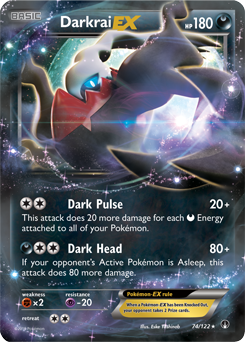 Psybeam is a really potent attack against Pokemon like Yveltal. Since Fright Night shuts off Mewtwo Spirit Link the best way to get an attacker is to use Espeon-GX. Confusion is definitely an underrated Special Condition at the moment, and can stall a turn if your opponent hits tails. Confusion can even win games in some situations. If your opponent only has one attacker, Psybeam can force them to make strange plays to try and remove Confusion or even force a 50 / 50 scenario of them straight-up losing the game from missing the attack. Psychic is a fantastic attack in the mirror, guaranteeing a KO on an opposing M Mewtwo-EX as long as it has at least two Energy attached due to Weakness. Finally, Divide GX gives the deck a GX move. Divide GX lets you clean up something you missed a KO on, or helps take out low-HP Pokemon in decks like Vespiquen. Combee only has 40 HP, meaning you could easily KO two Benched Combee and have two damage counters left to make numbers nicer later on (for example, 10 damage onto Shaymin-EX so a three-Energy Psychic Infinity can take a KO).

We see two M Mewtwo-EX decks in the Top 8 as well, making it likely that Mega Mewtwo archetypes will also be big in Sheffield. After this we a similar amount of Yveltal / Garbodor, Vespiquen and M Rayquaza-EX builds all with three or four placements in the Top 32. This shows that these decks are strong and would have some sort of an effect of the metagame for Sheffield. Yveltal is still a reasonably consistent and strong deck that has around 50 / 50 matchups against most of the field. Vespiquen has started to shift towards Pokemon like Zoroark to provide a strong damage output that isn’t bound by how many Pokemon are in the discard. Bench sizes are usually large, meaning Zoroark is hitting for at least 100. Builds are also including type-based Eeveelutions, Jolteon and Vaporeon, to double the damage dealt to decks like Volcanion-EX and Yveltal.

Finally, M Rayquaza-EX provides a massive damage output which can be set up in two turns. One player opted to include Volcanion-EX and Fire Energy just to use Steam Up; this looks crazy considering the 30 extra damage is only for Fire types, however the main reason to use Steam Up was to get Energy in the discard pile for Mega Turbo. This added an extra layer of consistency to Energy acceleration for the deck, and also gets useless Energy out of the hand to maximize draw from Shaymin-EX.

Moving to the Top 8, we can see that Vespiquen builds were able to take up two spots while Yveltal took one. The winning deck is one I haven’t mentioned yet, and that’s a variant of Turbo Darkrai-EX that uses Giratina-EX and Salamence-EX. The main reason is to make use of Double Dragon Energy, which count as two Darkness Energy towards Darkrai-EX’s Dark Pulse attack. Giratina-EX provides a strong wall versus Mega Pokemon, forcing your opponent to find a way to shut down Renegade Pulse. If Chaos Wheel can be powered up, decks that use only Special Energy like Vespiquen are shut down entirely. Finally, Salamence-EX preys on EX-heavy decks, like Volcanion and M Rayquaza-EX builds, where once four Pokemon-EX are in play, Beastly Fang is dealing 210 damage. I quite like this variant and the inclusion of Dragons, however it can make the deck slightly more clunky.

For Sheffield I wanted something that could go toe-to-toe with M Mewtwo-EX and Darkrai-EX builds, along with around 50 / 50 matchups versus the rest of the expected field. Consistency would be big, too — Getting into Top 32 was the main goal. Something I noticed in the day one standings for Anaheim was that all three Yveltal-EX / Garbodor builds were in the first eight seeds. This gave all three players a strong shot at Top 8 the next day, and showed the deck is still as consistent as usual. With that, I tested and wound up with this list.

Let me break down some of my card choices for the deck. There are multiple inclusions and exclusions that changed throughout testing to get the list to where it is now.

The usual count of Yveltal-EX has been three for a long time, and with Super Rod in the deck you can get back extra copies if needed. This is the main attacker of the deck, as per usual. Yveltal-EX is one of the best attackers this game has ever had.

Moving onto Yveltal, this is the decks sole single-Prize attacker. The Fright Night Ability is especially useful in this meta due to the high amount of Spirit Links played for M Mewtwo-EX and M Rayquaza-EX decks, while also shutting off big cards like Fighting Fury Belt and Exp. Share in Turbo Darkrai-EX decks. You also have a great option to stall a high-Retreat Pokemon in the Active position since Float Stone is also shut off. Pitch-Black Spear is a fantastic attack to set up two Pokemon-EX with 60 damage before coming in with Yveltal-EX’s Evil Ball to clean up.

I’ve been back and forth between a single copy and two copies of Yveltal, since the card can be so influential in most games, and is a brilliant opener against the majority of the metagame right now. For Sheffield I stuck with a single copy, as the extra copy usually ends up being discarded. If you’re in a position where a second copy is really needed, Super Rod is there just in case to shuffle Yveltal back in.

The idea for a 2-1 line of Garbodor came from Anaheim Regionals, where multiple Top 8 players opted to include only a 2-1 line. This count looks slightly risky, and at first I wasn’t too sure on it. However after testing I started to like the line. In nearly every game you usually only set up a single Garbodor, and would discard the second afterwards. Two Trubbish is still essential to make sure you can get one benched early on.

With only a single Garbodor, it means that having to Professor Sycamore it away early on is a possibility, but this can be offset with Super Rod. You do have a higher chance of prizing Garbodor, but there are now quite a few popular matchups where Garbodor isn’t that essential; so prizing it against a specific matchup is less likely.

One Tauros-GX, One Ninja Boy

This is the main inclusion from Sun and Moon, and it certainly makes a difference. All three of Tauros-GX‘s attacks can be powered up by a single Double Colorless Energy. I’ll start with the strong, vanilla Horn Attack for 60 damage, which is a great opener. The main attack Tauros-GX uses is Mad Bull GX. With six damage counters on Tauros-GX, Mad Bull is hitting for 180 damage, which OHKOs the majority of the format. Add any more damage counters and Tauros-GX is taking out everything.

Early on in games, opponents are usually unable to hit the 180 (or 220 with Fighting Fury Belt) needed to stop Mad Bull GX from becoming a powerhouse, providing a perfect wall as well. Finally, the last attack, Rage, is great if you don’t want to overkill a lower-HP Pokemon with Mad Bull when you have enough damage counters or if your opponent decided to go for their own overkill placing 160 or more damage onto Tauros-GX. This lets you save the big GX attack for later if the Tauros lives, and just use Rage to take a KO.

The final piece of the puzzle to make Tauros-GX even better is a single copy of Ninja Boy. This makes any damaged Pokemon on the field a possible threat, since you can play Ninja Boy straight into Tauros-GX, attach a Double Colorless Energy and Mad Bull GX for a OHKO. This might not happen too frequently, however when it does, the game certainly swings into your favor. Ninja Boy can also be useful just to remove Pokemon like Shaymin-EX from the field, or even swap between Yveltal-EX and the single Prize Yveltal (and vice versa if needed). Even though this is the majority of what Yveltal-EX decks obtained from Sun and Moon, it gave the deck another high HP Pokemon along with a way to take OHKOs without mass amounts of Energy.