PokeBeach’s January TCG Cup is over and the winners have been crowned!

The tournament was played in the Standard format at the time — Primal Clash through Evolutions.

Coming in first place is John Mostowy from southwestern Ohio! You may remember one of the articles he wrote for PokeBeach. He will walk away with 18 booster packs from TCGplayer.com.

Poorly! Well, just not competing all that much with school. I don’t get the opportunity to travel to Regionals. I did compete in a League Cup the other week and went 3-2. I don’t wanna talk about that.

I’ve been on the site for so long and it’s amazing to see the community still standing and pushing fresh and new content and ideas, and I wanna support that. So of course I’m gonna enter a free tournament haha.

What deck did you play for the January TCG Cup? 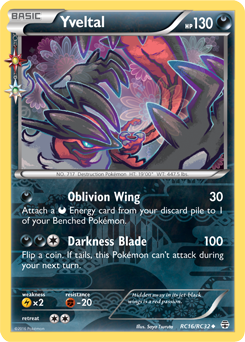 I went with the good ol’ Yveltal-EX / Garbodor. It’s the deck I had the most experience with from the last few tournaments and the deck I’ve been playing with the most this season. It’s a good deck. Well, was.

I personally hate Greninja BREAK because of the way you trade Prizes and because the Greninja player can put pressure on how quickly you set up Garb. Anything with Jolteon-EX triggers me (because of Flash Ray) but that’s about it. I don’t mind Mega decks because I play a copy of the Fright Night Yveltal and I can spread damage pretty conveniently with Pitch-Black Spear. I also like the Volcanion-EX matchup because Garbodor prevents them from OHKOing my Yveltal-EX with Steam Up on lock.

Geez, it’s been a while. Can’t say I remember all that much to be honest. I know I had a rough time with BugTrainer’s Yanmega build because I wasn’t expecting it. But other than the last round, much of it is a blur. I should make note of this. Sorry. :|

In game three against Trixss to decide who would go 6-0, I needed a couple things. Lemme describe my board real quick: I’ve got a damaged Yveltal-EX with a Fighting Fury Belt in the Active slot with a basic Dark, a damaged Yveltal-EX on my Bench with a Double Colorless and no Tool, an Oblivion Wing Yveltal with a Dark and a Float Stone, a Garb, and a Shaymin-EX that I Parallel City‘d away. There are no more Darkness Energy in my deck and I have only a DCE left in-hand. He’s playing M Scizor-EX and both Scizor on-board are out of OHKO range — but he has a Shaymin Benched. His hand is pretty big but I notice he’s burnt all of his VS Seeker, so I pray that if I can Oblivion Wing to the FFB’d EX, I can retreat to that, attach the last DCE, Lysandre the Shaymin, and X-Ball for 120 and the game. However, if he has a Lysandre or an N, I’m cooked. I risk it for the biscuit, and I win the game. It was crazy.

After that sixth round against Mega Scizor, definitely the Oblivion Wing Yveltal. That thing put in work when all of my DCE were getting discarded left and right. I could make sure I was pumping out 110 Evil Ball attacks (with FFB) to put those at 2HKO range, and it was pretty helpful in other rounds when I had to Ultra Ball or Professor Sycamore a couple of Energy away.

Nope. Honestly not. I think this was the best way to play it.

Umbreon-GX might see an appearance and slide on into the list some shape or form, but I dunno how that’s gonna pan out with Garbodor also being in the list (if you even include the trash) but…yeah. Sun & Moon is gonna change the game and it’s gonna be great for the format.

Coming in 2nd, 3rd and 4th places were Fernando Santacruz (Trixss), Ben Pechota (theprp30) and Aaron Roffman (My Little Keldeo). All three won a bunch of booster packs from the latest expansions, but Fernando and Aaron both got double the prizes because they are premium subscribers. Their deck lists can be seen below:

March’s tournament will be posted on March 1st, and February’s tournament is currently underway. Each tournament awards up to five booster boxes of product to top finishers plus promo products and additional booster packs to premium members. The prizes for premium members just receive a huge increase too, so don’t miss your chance to play in the next tournament!