It’s been a little while, hasn’t it? I took a little break from writing for the month of October, and I believe that my latest article was early September, so it really has been some time before I wrote an article.

That doesn’t mean I’m not active in the scene though, I went 5-2-2 at Philadelphia Regionals with my go-to Expanded deck: Maxie’s Yveltal. I’ve been playing in local League Challenges as well, and have racked up 44 Championship Points so far this season (substantial progress to 500, I know). Without League Cups and only one Regional Championship finish, I’ve been starving for points! The Cities grind that has always been around this time of year was always so fun to me.

Anyway, I’m preparing for my next big test and that is Fort Wayne Regionals this weekend. I’m hoping to finish strong so that I can earn a good chunk towards my 500 for this season. School has been really difficult for me this year, since it is my final semester (hopefully) here at the University of Nebraska. Luckily for me, the tournament is on Thanksgiving weekend and won’t force me to miss any school.

Evolutions initially seemed like a very mediocre set to me. After testing with the cards, some cards really came through such as Dragonite-EX and Raticate. There’s a few more that found their way into my lists, so I will be talking about those later. I’ve found that Sky Field decks got a huge boost from Dragonite-EX‘s release. I have three decks I will be discussing in great detail, as these have been the decks I have been testing the most in the last few weeks. I have one that is a definite favorite for Fort Wayne, so be sure to read on. Make sure to check out the flip side of this too, my good friend Andrew Mahone will be publishing an article on Parallel City decks, which is an absolute foil to mine. I’m going to convince you that Sky Field decks are the way to go going forward and that Sky Field decks can now get over the hump that is Parallel City.

The State of the Format

The Standard format as it is right now is in this awful “Rock-Paper-Scissors” type of game. This has happened in the past (the 2012 Cities format really jumps out to me). Very few decks are lacking hard counters due to mechanics or Weakness. Most decks now rely on single attackers that carry the deck. Any sort of Mega Pokemon deck uses one attacker primarily, that being their Mega Pokemon. If you play against the Weakness of that Pokemon, you’re basically done for.

What we saw in Orlando was the rise of decks that attack with multiple Pokemon, especially ones that synergize well together. Team Chaos Gym dominated Orlando with a Darkrai-EX / Giratina-EX / Garbodor deck. Dark decks always tend to be the decks that have the most good matchups, mainly because the plethora of excellent attackers in those decks. In this deck alone, you have Giratina-EX which plays a really powerful disruption game in addition to being something that isn’t weak to Fighting. Darkrai-EX is the main attacker with its Dark Pulse attack getting bolstered by Double Dragon Energy attachments to Giratina-EX.

Other decks did well, such as M Mewtwo-EX and Volcanion-EX. M Gardevoir-EX decks made a strong showing in Top 16, however none of them cracked into the Top 8. M Rayquaza-EX, the presumed runaway favorite was countered heavily and did not have a good showing at all. Almost every deck in Orlando’s Top 8 has a strong counter to M Rayquaza-EX.

Greninja was countered heavily by the prevalence of Garbodor. Travis Nunlist wrote about a Greninja deck that could hang with the Mega Pokemon / Garbodor decks by playing heavy counts of Faded Town. Faded Town obviously doesn’t help much versus Darkrai-EX / Giratina-EX / Garbodor, so these Greninja decks didn’t make it far in day two and a lot of them didn’t make day two at all.

There have been some results from tournaments in Europe, such as Dortmund and Liverpool. The only big takeaway that I took from these tournaments was the success of a rogue Giratina-EX / Crushing Hammer / Garbodor. This deck made Top 8 at Liverpool and revealed itself to be a possible deck to look out for at Fort Wayne.

Here’s my take on a tier list for Fort Wayne.

Sky Field decks, such as M Rayquaza-EX, Rainbow Road (Xerneas), and M Gardevoir-EX have been played a bit in the pre-Evolutions metagame. However, these decks have always had recovery issues with the amount of Parallel City there is in the game right now. These decks gain bonuses to their damage output with more Pokemon on the Bench, whether its just sheer number of Pokemon (M Rayquaza-EX), types of Pokemon (Xerneas), or number of Pokemon to discard (M Gardevoir-EX), these decks get hurt by there being less Pokemon on the Bench or in the deck.

Dragonite-EX‘s Ability allows for some pretty great recovery options when paired with Hoopa-EX. Dragonite-EX counts as a Pokemon on your Bench as well to bolster your damage output. One thing to really consider is when these Dragonite-EX get discarded they can’t recover each other, and a deck that relies on these for recovery options should probably run copies of Buddy-Buddy Rescue, Super Rod, or a recover Supporter such as Karen or Brock's Grit. Redundancy was something I had stressed to me a lot in my Navy days, Pokemon is no different since a lot of crazy things can happen in a game. How often have you had to discard your lone Super Rod early in the game? We do everything we can to prevent these things from happening, but Sky Field decks absolutely need more options for recovery. 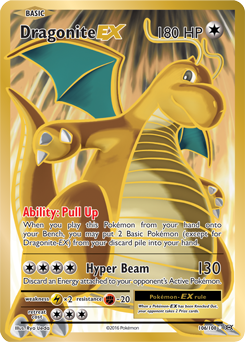 Super Rod and recovery Supporters turn cards such as Dragonite-EX into force multipliers since we can shuffle back in a couple of Dragonite-EX and grab up to four Basic Pokemon. The last thing I’m going to discuss with Dragonite-EX is that it lets you reuse come-into-play effects pretty easily. Dragonite-EX instantly becomes an Absol, or a Shaymin-EX, or a Hawlucha.

These are two extra recovery cards that have come out. We know a bit about Karen already, but Brock's Grit will find its way in many decks simply because of its versatility. The option to recover both Basic Energy cards and Pokemon with the same Supporter is a big deal to decks that used to run multiple copies of Super Rod to keep up with Parallel City drops.

Karen serves a double purpose in that it really hurts Vespiquen decks. They haven’t been around lately, but some may still find their way into the early rounds of Fort Wayne Regionals. Vespiquen isn’t terrible, don’t get me wrong, but Karen is a card that some decks play, and I believe without Battle Compressor, it’s nearly impossible for Vespiquen to recover from getting hit with a couple of Karen plays.

Most players I’ve spoken to have taken more of a liking to Brock's Grit, but both cards are really good and should be played based on your personal preferences.

The Garbodor plus Parallel City Problem

A lot of players argue against Sky Field decks strictly because of this play. This counters our Dragonite-EX and our Shaymin-EX and makes it really hard to recover after getting a Bench dropped to three. Obviously, this hurts our decks a lot, especially the first two decks I’m going to talk about. The third deck, it doesn’t hurt all that much.

This combination hurts so much because it usually means that we need to respond with some recovery cards in addition to drawing the Pokemon we need to refill our Bench. Dragonite-EX provides some immediate recovery and is our typical response to a Parallel City play. With Garbodor out, we lose that option. I generally will focus on the opponent’s Garbodor to remove it from the game. These decks typically play down only one Garbodor in a game, it’s a little difficult for them to get two. It’s also pretty rare that they get a Trubbish down turn one, in addition to the rest of their set up. They also rarely play Hex Maniac in addition to Garbodor, so removing their Garbodor essentially gives you free reign to use your Abilities almost the entire game. This allows you to recover and KO Pokemon at will.

Your opponent can get out more Garbodor throughout the game or you won’t get the chance to KO Garbodor early, I get that. But these decks can still recover and cope with this. In the past, Parallel City alone made things dicey, and now we have Dragonite-EX as a weapon, requiring decks to get out Garbodor to really hinder Sky Field decks.

I believe that M Rayquaza-EX can bounce back quickly from being countered as heavily as it did in Orlando. Decks such as M Gardevoir-EX get countered pretty heavily by it, and Gardevoir will be incredibly popular. In addition to this, Dragonite-EX pushes the deck more by giving it the ability to recover from Parallel City plays quickly and relatively easily

Giratina-EX‘s Chaos Wheel plus a Parallel City drop still counters this deck hard. The Giratina-EX can’t even be damaged by M Rayquaza-EX, and even if it is, it will only be hit by 90 or so damage. No amount of Pokémon Ranger will really help against this combination.

Here’s my current list for M Rayquaza-EX that I’ve been testing.