While the excitement of opening Charizard, Pikachu, and Mewtwo again may still be strong with the Evolution expansion, now is the perfect time to discuss the most important aspect about this set: its contributions to new deck ideas! There is an incredible amount of variety in Evolutions, from the retro upgrades to the re-releases of recent cards, and while I’m not at all convinced it will be the game changer we were hoping it would be, Evolutions is the best generation-ending set in years.

I enjoy making super-thorough reviews of most cards in a set when it comes out. This article will be no different, but today we are focusing only on the strongest and most controversial cards, most likely to some impact your upcoming tournaments.

Some sets completely reshape the landscape of the game: Roaring Skies changed how fast we play the game, and BREAKthrough as well as BREAKpoint formed the backbone of the metagame since release. Other sets, however, function mostly in a support role, enhancing the overall flavor of the format rather than reshaping it.

Evolutions is in the latter category. While nothing it adds fundamentally transforms the game as we know it, all the cards add a mix of additions to new decks, decks that stand on their own, and even a couple cards that can go into anything.

One of the most unique cards in this set is Beedrill. Historically, it’s been difficult across all formats to get three or four Stage 2 Pokemon into play all at once, and that’s no different in the current Standard and Expanded formats. All the same, Forest of Giant Plants makes doing so relatively easier for Grass decks, which works in favor of Beedrill.

The idea is pretty simple. Kill what you can in play with Swarming Sting, even if that’s nothing but Shaymin-EX. To get out a quicker Swarming Sting, as well as keep your Beedrill from being at risk constantly, I’ve added Mew-EX and Max Elixir to lead your attacks. I’ve also added a single Trevenant-EX to set up interesting scenarios where you lock a support Pokemon into the Active position, and then use that time to set up attackers. Worst-case scenario, you force the opponent to use a switching Supporter like Olympia. 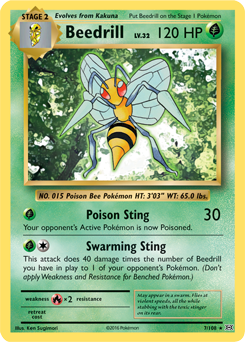 As for the Tool choice, I settled on Bursting Balloon in Standard because the deck’s main hurdles are Mega Pokemon outside the range of Beedrill’s snipes. If you force a Mega Pokemon to charge into a Bursting Balloon, you open up possibilities that might not have existed earlier. A 3HKO, for example, may turn into a 2HKO, and a two-shot into a one-shot. It’s normal Bursting Balloon logic, but this deck uniquely depends on that sort of math to win games.

While this build serves as a skeleton for both formats, I’d argue that it has the potential to be much stronger in Expanded. For one, there’s actually a good Beedrill from Plasma Freeze you can tech into the deck.  Additionally, decks with low-HP basics as well as decks with a sea of prominent Grass-weak Water Pokemon make Expanded fertile ground fro Swarming Stings to be lethal. You may need a way to answer Archeops when it shuts off your Evolutions, but I want to see this card flourish in both formats, not just Standard.

This updated Charizard is giving me flashbacks to when I first started playing as a kid… in a bad way. The fatal flaw of nearly every Charizard card is that it has a cool, flashy attack in exchange for a steep cost. In this particular Standard format, there are very few ways to charge up Charizard with ease; however, Expanded yet again opens up possibilities for Charizard that don’t exist in Standard, much like with Beedrill. Additionally, the heart of Charizard being a more viable card than other attackers rests in using the Energy Burn Ability to make all your Energy count as the Fire type but you can’t do that if a Garbodor stays in play!

How could Charizard be played in Expanded? I see Eelektrik as a potential path to making Charizard work, as well as a Blacksmith build focusing exclusively on Charizard. In either version, Double Colorless Energy should be incredibly helpful in not only getting you up to paying the initial four-Energy cost, but allow you to sustain a barrage of 200 damage Fire Spins.

Unfortunately, like any other flashy card, I think there are better substitutes for Charizard in Eelektrik as well as Blacksmith-focused builds. One such option is Zapdos.

Poliwrath is a perfect example of a card which is extremely powerful on paper, but is overshadowed by the cards surrounding it. 100 for a single Water is incredible, but when Greninja does almost as much for the same cost, has free Retreat, has a slew of support effects, and has a BREAK Evolution, Poliwrath begins to look pretty lame.

You could try playing Poliwrath with Garbodor and a mix of Rough Seas and Faded Town as an alternative to running Greninja. Go blow-for-blow with pretty much every deck in the format, while occasionally enjoying a matchup where you can tank defensively, as well as the occasional blowout versus Volcanion. Or, if you have less patience for a new deck, and more patience for a more obvious outcome, you could wait until Greninja rotates, allowing Poliwrath to come into its own as one of the only remaining efficient non-EX Water attacker. A single Water Energy for 100 is good, people! It’s only a question of it’s outclassed at any one particular time or not.

Remember when I said we’d be discussing a better alternative to attacking with Charizard in Eelektrik? Well, here we are, a Basic non-EX capable of Knocking Out almost every Pokemon-EX in the game. Zapdos gives Eelektrik a more offensive element which Raikou did not, but with no Weakness, actually works well with the defensive capabilities of the deck. Listed below is a variant of Eels which incorporates Zapdos, and even adds a couple things to make it the attacker the deck needed.