Hello PokeBeach! I hope you all had a great Halloween. I imagine you dressed up as your favorite Pokemon or trainer and went door to door begging for candy or went out partying with your friends. To be honest, it’s more likely that you stayed at home watching horror movies and playing Pokemon like me, and I had a fine evening.

I’ve been playing a lot of cards games lately, both Pokemon and Hearthstone. I wasn’t able to attend Florida Regionals, but my testing partners Igor Costa and Jimmy Pendarvis both went and did very well. They played M Mewtwo-EX, which was a pretty popular choice for the event and ended up netting Igor a Top 8 and Jimmy a Top 16 finish. However, I did play in an Expanded League Challenge and won with Speed Darkrai!

By far the most notable thing about Expanded is the sheer amount of decks that see play. There are, frankly, too many cards in this format, and too many viable archetypes. It’s hard to keep track of, and the winning deck will just be whatever happens to run into good matchups, and not necessarily the best deck.

First up is everyone’s favorite lock deck, Trevenant. Item-lock is always amazing, and it’s especially good in Expanded where there are some really overpowered Items like Dark Patch. You absolutely cannot go into a tournament without testing against or at least being aware of Trevenant, because it will be played. Other decks have to be the ones countering or dealing with it, not the other way around. Almost every deck plays 30 or more Items, so shutting off over half of your opponent’s deck is just miserably good.

Trevenant isn’t only a lock deck, it’s also a deck that can aggressively take Prizes. The spread damage from Trevenant BREAK can add up very fast, unless you’re playing against a Rough Seas deck. Wobbuffet locks Abilities in the beginning of the game if we can’t get a Trevenant set up in the first turn, but the likelihood is that we will do that anyway. Jirachi-EX is a nice little Expanded tech to pull out that crucial Wally on our first turn. Mewtwo-EX is there as a heavy hitter, to counter other Mewtwo-EX, or to just finish off a Pokemon that’s been weakened by Trevenant BREAK’s spread damage for the final two Prizes.

Although there are a lot of tech Supporters that see more play in Expanded, like Xerosic and Hex Maniac, we don’t need those in this deck. We don’t want to shut off our own Ability ever, and we need to make room for Wally. This list is the Bursting Balloon version to get that extra damage and be more aggressive, but some people still play Hammers instead. That’s worse against other Item lock decks like Seismitoad-EX. Computer Search returns and remains my Ace Spec of choice.

Essentially, going first and getting a turn one Trevenant should win us any matchup, provided we have something to follow it up with and aren’t sitting on a completely dead hand afterwards. Against a Rough Seas deck like M Manectric-EX, it’s important to win the Stadium war, so don’t play the first Stadium. Under Item-lock it will be difficult for them to continually access the Stadium anyway. Bursting Balloon also really helps here.

Dark is not a great matchup, because we have a terrible Weakness to it. If they go first and Dark Patch or Max Elixir like a maniac, then Trevenant is in for a quick end. However, it’s possible to win if that doesn’t happen. The Bursting Balloon really help us to take KOs. M Manectric-EX isn’t the greatest matchup either, because they have a lot of health, play Rough Seas, and replenish Energy with their main attack. These are the main two decks we would have to watch out for playing Trevenant.

This next deck is for those players that don’t want to just win, they want their opponent to cry. If you enjoy playing the long game and running your opponent out of resources, this is the deck for you. 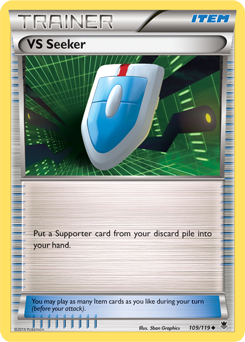 Well, this deck does nothing except sit back and Junk Hunt, so there’s not too much to talk about here. Jirachi-EX fetches our one-of Supporters like Team Flare Grunt and Delinquent from the deck, so they’re just an Ultra Ball away from being at our fingertips. Garbodor slows our opponent down enough for this strategy to work. Latias-EX is a nice wall to hide behind, especially against Trevenant, because Trevenant can’t damage it.

In addition to the draw Supporters, this deck plays a lot of utility Supporters. The reason for this is because with Sableye, we basically have endless VS Seeker, so we could use any Supporter at any given time multiple times per game without worrying about conserving resources. To that end, we play many one-of Trainers because they can be re-used. Red Card, Enhanced Hammer, and Life Dew can be particularly devastating to the opponent. Yes, Sableye goes down very easily, but does that matter when our opponent doesn’t take a Prize? There are endless possibilities with this deck, so it’s best in the hands of an experienced player, in my opinion.

Essentially, all the cards in this list are meant to stop our opponent from doing anything the entire game until they deck our or concede, since we won’t be taking any Prizes. As such, it requires a lot of patience to pilot well.

I wouldn’t play this deck at all, personally, but it does have merit. I think it’s punished too hard by explosive starts from Dark, and also by decks that have Energy acceleration that’s not based on Abilities like M Manectric-EX. However, there are certainly ways to navigate those matchups. Hammers and Head Ringer will be our best friends against Energy acceleration, and if we flip well, our opponent could fall too far behind to do anything. However, Dark Patch and Max Elixir make this difficult to keep up the entire game. Going for Ghetsis turn one is a great play, because it hinders them from setting up, and like we discussed earlier, decks nowadays are 50% Items. Against M Manectric-EX, Team Aqua's Secret Base is really good because it keeps them from retreating around for free.