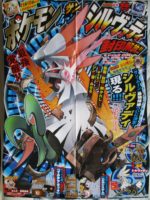 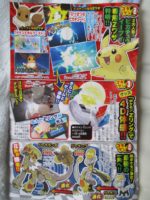 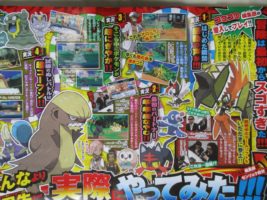 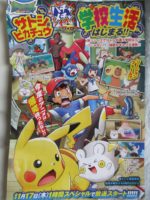 Silvady (as in “silver body?”) is the evolved form of Type: Null. It’s Normal-type like its pre-evolution. Its ability is AR System, which allows it to change its type to any other type depending on a certain held item attached to it called Memory. (So basically Silvady has Arceus’s Multitype Ability and instead of Arceus’s plates it uses the Memory item to determine the type.) The type change is seen in the color of the energy beam coming out of its head, its mane, and its eyes. Its new attack is named Multi Attack, which changes type based on the Memory hold item. When Type: Null evolves under the care of a trusting Trainer, its helmet breaks off.

Jangmo-o’s evolutions have also been revealed: it evolves into Jarango and then Jararanga. Both are Dragon/Fighting, unlike Jangmo-o, which is just Dragon-type. They can learn the Fighting-type move Sky Uppercut.

As previously revealed, Alolan Grimer is Poison/Dark. It became this way from eating Alola’s garbage.

CoroCoro has also revealed Ilima, the girl with the pink hair in the third scan (she’s named after a Hawaiian flower). She is the first Trial Captain. It was accidentally revealed earlier today by gaming websites that were able to play early demos of Sun and Moon that there will be several more Trial Captains in the game — possibly seven or eight.

The magazine also revealed that the Sun & Moon anime will debut on November 17th with a one-hour special. Ash attends a school which is lead by Professor Oak’s cousin, Samson Oak.