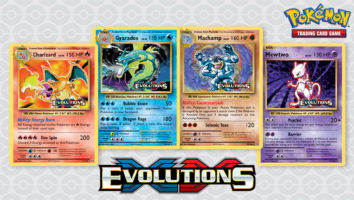 Charizard, Gyarados, Machamp, and Mewtwo will be the promo cards fans receive for playing in Evolutions prerelease tournaments! Unlike the last set, the cards are once again in-set reprints with a stamp of the set logo. They do not have unique promo numbers.

Each participant will receive a Prerelease box containing a 22-card Evolution pack, four 10-card booster packs, and an exclusive foil promo card. The Evolution pack provides a solid foundation which, along with the booster packs and Energy provided by the Tournament Organizer, is used to construct a 40-card deck. At the end of the tournament, Tournament Organizers may award three additional booster packs to all players or may give them all to top finishers.