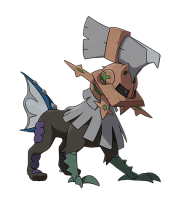 This Pokemon wearing a mask has been dubbed “Null,” meaning nothing.

The shapes of its front and hind legs are clearly different. The reason is that Type: Null was constructed to synthesize the strengths of various Pokemon, enabling it to adapt to any situation.

The mask fitted to Type: Null’s head is a piece of equipment designed to control its latent powers. It’s extremely heavy, so it also serves to hinder Type: Null’s agility.

To complete a certain mission, there was need of a Pokemon powerful enough to rival those Pokemon often spoken of in mythology. 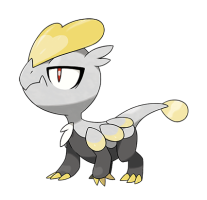 Jangmo-o has the pride of a warrior, although it remains humble about its capabilities. In its pursuit to become stronger, it never neglects its training.

Because Jangmo-o uses the scales on its head for both offense and defense, it never turns its back to its enemies. Many Trainers see this behavior and take it as proof that Jangmo-o is a valiant Pokemon.

Jangmo-o gather in harsh locales like canyons, where no other people or Pokemon are around, to live together as they train. 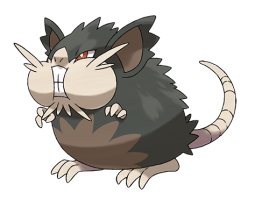 Because urban areas are their main habitat, their diet is higher in calories than ordinary Raticate. As a result, they have become hefty.

Alolan Raticate prefers to eat only fresh fruits and high-class ingredients. There are rumors that a certain top-notch restaurant takes advantage of Alolan Raticate’s taste buds by bringing it along when choosing ingredients to buy, and having it taste test new dishes.

Alolan Raticate continually stockpile huge amounts of food in their nests. They mostly prefer to send out Alolan Rattata to gather food while they themselves stay home in their nests and just eat.

Alolan Raticate is the Totem Pokemon of the trial that takes place in Verdant Cavern on Melemele Island in Pokemon Moon.* It summons Rattata to help it confront those who take on the trial.

*Gumshoos appears as the Totem Pokemon in Verdant Cavern in Pokemon Sun.

This young man lends his strength to Team Skull as an enforcer. He places a high value on being strong in Pokemon battles. His partner Pokemon is the mysterious Type: Null.

Sun and Moon are 12 hours apart!

The Aether Foundation works in the Alola region. The foundation’s goal is to care for Pokemon that have been hurt. The Aether Foundation has constructed an artificial island called Aether Paradise. There, they not only provide shelter for Pokemon, but also conduct various research projects. It seems that the main character will also be able to visit Aether Paradise during the adventure.

Dexio and Sina will show up as you progress through your adventure. These two appeared in Pokemon X and Pokemon Y as the professor’s assistants. They’ll give you an item called a Zygarde Cube and ask you to collect Zygarde Cores and Zygarde Cells during your adventure in the Alola region. Cores and Cells can be found all over Alola! If you collect lots of Cores and Cells, the path to finding Zygarde in Pokemon Sun and Pokemon Moon may become clear.

In the Alola region, rumors are flying about mysterious creatures known as Ultra Beasts. Ultra Beasts possess mighty powers and could pose a threat to humans and Pokemon, so they are feared. It appears that the Aether Foundation is also conducting research on these Ultra Beasts. According to rumor, multiple Ultra Beasts exist, each of them called by a code name.

UB-01’s body is composed of a glass-like substance. However, it’s constantly changing shapes, never settling on one.

While evidence of something like a survival instinct can be observed in UB-01, no one knows whether it has a will of its own or any emotions. It’s said that, for some reason, its movements resemble those of a young girl.

The pictures you take will be evaluated, and as you take better pictures, more features—like the ability to zoom in—become available. 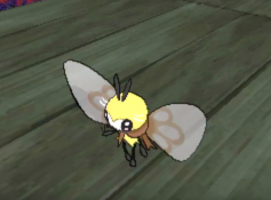 A quick shot in a different Japanese trailer shows a Pokémon for a short second that appears to be an evolution for Cutiefly. Since the Pokemon only appeared momentarily, no other details about it can be confirmed at this time.