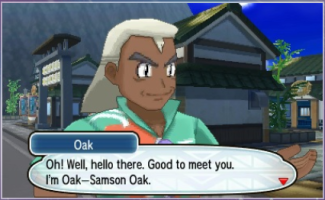 One more week until I shoot my thesis film! Wish me luck! :p

The trailer reveals a man named “Professor Oak” who looks like the Professor Oak we know and love, but with a tan and longer hair. He’s discussing regional formes. So either Professor Oak has been researching the new Alolan formes out in the sun for a little too long, or this Professor Oak is a relative of the one from Kanto (such as a brother or cousin).

Update: The official website has been updated with English information about Samson Oak!

Regional Variant Researcher: Is This Professor Oak’s Alola Form?! Samson Oak does research on the regional variants that have taken root in the Alola region. He’s a cousin of the Professor Oak—the famous authority on Pokémon research in the Kanto region. The two could practically be twins!