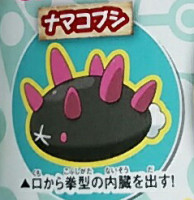 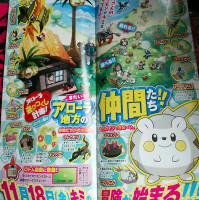 Whoever leaked CoroCoro missed a new Pokemon that was quietly on one of the pages — a friend in Japan has personally sent me scans of all of CoroCoro‘s pages, revealing Namakobushi. It is a sea cucumber Pokemon and spits a fist-shaped organ out of its mouth. Its name is a combination of “sea cucumber” and “fist,” so perhaps it will be Water/Fighting. No type was officially revealed, however. The Pokemon is casually thrown on to a page with other Pokemon that were previously revealed, which may be why the initial leaker missed it.

CoroCoro also did not have TCG news this time around.