‘Sup, you guys! Ashley Glofer here. I’m new to article writing, so only a tiny fraction of ‘Beachgoers must know me. I don’t do competitive TCG, but I do play against friends regularly, and I hope to share some of my knowledge with you readers through this article!

While we’re waiting for August to bring us Steam Siege, let’s take a look at some of the best cards in the latest set, Fates Collide. (I may or may not have chosen Fates Collide for the fact that it was released on May 2, my birthday.) The cards I’ll be discussing today are two items, three Pokemon-EX, and a regular Pokemon, as well as their possible combos. This list provides only my opinion on the cards, but hopefully my insights will convince you to include some of them in your deck, if you haven’t already. Here goes!

Since Energy Pouch is a Tool card, it’s more efficient than an Energy Retrieval or a Super Rod. Put in the right decks, it can likely be a recycling card that’s almost as great as the distinguished M Manectric-EX. However, since it is a Tool card, it means no more Muscle Band, Float Stone, Hard Charm, Weakness Policy, or even the Rock Guard or Life Dew ACE SPEC. There is a solution, though.

With this combo, you can still use the above-mentioned Tools. Then, when your Active Pokemon is about to be KO’d and you don’t have any way to heal, just play a Tool Scrapper (not in Standard, sorry) and place your Energy Pouch in the new space. Andddddd KABAM! You’ve got recycled Energy that could give you a chance to get back at your opponent with a new Pokemon.

This Tool can be useful, but to me it seems like one of the unfortunate cards which will be forced out of the deck list due to lack of space.

Unlike Pokemon Catcher, CARD NOT FOUND does not require you to flip a coin, so it’s pretty good for countering decks that run Megas (which is nearly every deck in the format). Plus, it’s an item, so you don’t have to waste your one-Supporter-per-turn play using Lysandre. Imagine this scenario:

Your opponent has a heavily damaged Mega sitting on the bench. One more turn, and it’s gonna have enough Energy to attack…and likely finish you off before it even gets KO’d the following turn. You have an Umbreon-EX (with enough Energy, fortunately) as your Active Pokemon. All is not lost! You play your Mega Catcher, force-switch your opponent’s Mega to become his new Active Pokemon, and attack with Umbreon-EX’s second move, Endgame. KO! Four prizes for you.

Night March just got stronger. Too many Night Marchers in the discard pile, and fewer than you’d like on your Bench? No problem. With Mew as your Active Pokemon, the attack Encounter can bring out Joltik.

Upon benching Joltik, you can attach a Double Colorless Energy to Mew to attack. But why not make your game even stronger? With Dimension Valley, one Basic Energy will do. The best thing is, the opponent only takes one Prize card for Knocking Out Mew, instead of Mew-EX. Night March triumphs once again.

With three attacks, Zygarde-EX is pretty similar to Lucario-EX, and many players think Zygarde-EX was brought to replace Lucario-EX for the Fighting-type decks in Standard. As if it isn’t already powerful enough, Zygarde-EX comes with its own little Tool up its sleeve.

With the All Cells Burn (nice name) attack on Power Memory, Zygarde-EX can unleash 200 damage at the expense of discarding three Energy. It’s worth it, though, ’cause this Pokemon Tool is pretty much gonna take those prizes for you. Throw some Regirock-EX on the Bench and a Fighting Stadium on the field, and Zygarde-EX will be able to OHKO even Wailord-EX. Isn’t that neat? How about we make it better?

Worried about Zygarde-EX getting KO’d before it can even attack? Don’t want to waste Tool space with a Power Memory just yet? One strategy is to attach a Focus Sash to Zygarde. When enough damage is dealt to knock it out, Focus Sash is discarded and Zygarde-EX is left with 10 HP (and at least three Energy, hopefully). Now, you can attach Power Memory and crush your opponent with All Cells Burn ― you don’t even have to worry about the Energy since Zygarde-EX is about to be KO’d anyway.

Glaceon-EX is sure to make its way to competitive decks soon because of its second attack, Crystal Ray, which prevents damage from Evolution Pokemon on the next turn. This means Megas and BREAK Evolutions, so fighting off M Rayquaza-EX and Greninja BREAK becomes much easier.

Here comes another Eeveelution to save the day and share the glory! This is pretty well known by now, but Jolteon-EX, which blocks against Basic Pokemon, matches well with Glaceon-EX; together they seem to counter every type of Pokemon. With a Float Stone on Glaceon and Jolteon’s zero Retreat Cost, it’ll be easy to switch around as needed based on your opponent’s Active. Extra backup like Max Elixir to accelerate Energy and Rough Seas to heal faster helps too. 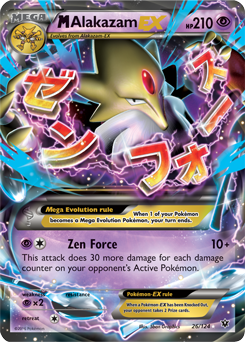 Finally, the very card Fates Collide centers around! Crobat players can start rejoicing. Alakazam-EX and its Mega Evolution are probably the most interesting in the set to write about.  Alakazam-EX’s Ability allows it to dish out damage every time it evolves into M Alakazam-EX, and to make full use of that comes the reprint of a previously kinda useless item:

Devolution Spray even lets you keep the Mega after you’ve devolved it. How kind. Anyway, after using Alakazam-EX’s attack, Suppression, you Mega Evolve it, playing Alakazam Spirit Link so your turn doesn’t end, and then attack with Zen Force. All in all, (assuming the Defending Pokemon has Energy attached to it,) you’ve dealt a grand total of 210 damage for only two Energy, and in only two turns! (Three if you don’t have an Alakazam Spirit Link.) So imagine what would happen if you use Devolution Spray the next turn and repeat the process all over again. Couple it up with a Giant Cape just in case, and you’re good to go.

That’s all for today. I hope this article has given you something new to think about pertaining to Fates Collide. At this time, everyone’s probably either enjoying Pokemon GO or complaining about not being able to download Pokemon GO in their country; but thanks for reading, and see you again soon!