We now have the full English details and HD artwork for all of yesterday’s new Pokemon — plus Komala, Rockruff, and Zygarde’s formes!

Tapu Koko is a special Pokémon that protects the area where it lives. It’s called the guardian deity of Melemele Island, one of the islands of the Alola region. Although it’s known as a guardian deity, it’s a surprisingly fickle Pokémon, and will not necessarily come to your aid if you need help. 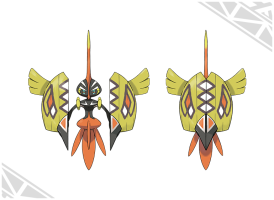 Despite that, this Pokémon has a strong sense of curiosity. If it becomes interested in a person or in other Pokémon, it may come to play or battle with them.

Tapu Koko’s Ability is Electric Surge, an Ability never before seen in a Pokémon. Electric Surge fills the field around the Pokémon’s feet with electricity when it appears, raising the power of any Electric-type moves for Pokémon on the ground and preventing any Pokémon from falling asleep. Tapu Koko can learn a new move called Nature’s Madness, which slams into an opponent and reduces that Pokémon’s HP by half! 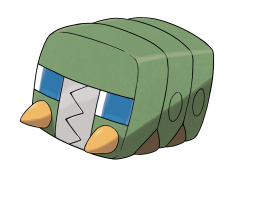 Charjabug stays perfectly still in preparation for Evolution, and often spends time with its body half-buried in the earth. Charjabug is able to store up electricity. It can store enough power to run a household for a whole day. The power it stores can be provided to other Pokémon, so it can also serve as a battery! 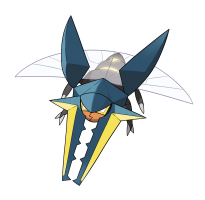 Vikavolt is like a fortress that zooms through the forest, firing a beam of electricity from its mouth. Its huge jaws control the electricity it blasts out.

Vikavolt is adept at acrobatic flight maneuvers like tailspins and sharp turns. It can fly at high speeds even as it weaves its way through the complicated tangle of branches in the forest.

Vikavolt clasps Charjabug with its legs and uses it as an extra battery. Even if a battle drags on, it can use the electric power from Charjabug to continue firing off powerful moves. When Vikavolt is engaged in a fierce aerial fight, it releases Charjabug to make itself lighter and increase its mobility. 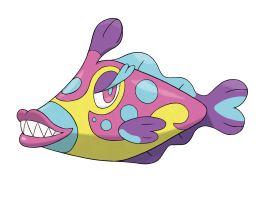 Bruxish emits a strong psychic power from the protuberance on its head. When its opponents are bathed in this power, they’re stricken with terrible headaches and fall unconscious. As it emits its psychic power, it grinds its teeth loudly. When nearby Pokémon hear the sound of Bruxish’s teeth gnashing, they sense danger and flee immediately.

In the Alola region, lifeguards let Bruxish remain in their area to prevent dangerous Water-type Pokémon from gathering there.

Bruxish digs holes in the seafloor, leaving just the protuberance on its head exposed, while emitting a low level of psychic power. This serves as radar, so when it detects prey, it can leap to the attack!

Bruxish can have the new Ability Dazzling, which no other Pokémon has ever had. The Dazzling Ability prevents opponents from using priority moves that normally strike first. 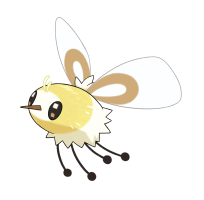 Cutiefly can detect the auras of living things, including people, Pokémon, and plants. They search out flowers by the color and brightness of their auras and then gather their nectar and pollen.

When living creatures are excited, it seems that their auras resemble those of flowers in full bloom. As a result, these Pokémon tend to gather near people or Pokémon feeling particularly happy or sad.

Cutiefly mostly live in the fields and meadows on the outskirts of cities, but they sometimes appear in towns and even inside buildings, drawn in by the emotions of the living beings of the community. 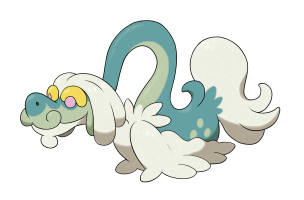 Drampa are dragons that live alone in the mountains 10,000 feet above sea level. Since they can’t obtain the Berries they feed on at that range, they descend to the base of the mountains at dawn every day. Drampa love communicating with people and Pokémon.

Drampa are especially gentle with children and often appear at schools and parks where children gather.

While Drampa is usually a very gentle Pokémon, it can fly into a rage if a child it cares for is hurt in some way. The Dragon Breath move that it fires off at such times is powerful enough to blow down buildings! 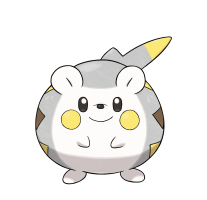 Togedemaru is the Roly-Poly Pokémon that gathers electricity and stores it. The long needle that grows from the back of its head works as a lightning rod to attract electricity. With this reservoir of electrical energy, Togedemaru is able to release powerful Electric-type attacks!

Covering its body is a pattern of fur with strands like needles. That means that Togedemaru can roll itself up, and presto—it’s a ball of prickles!

Some skilled Trainers have developed the strategy of getting other Pokémon to unleash Electric-type attacks on Togedemaru, which absorbs their power to use in a response attack!

On days when lightning strikes, you can sometimes see Togedemaru gather and bristle up their needles, waiting to be struck by lightning. 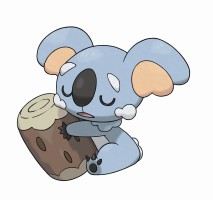 No one has ever seen a Komala awake. It eats, travels, and even battles while sound asleep! Its saliva can be used as medicine for the sick or sleepless, according to ancient people. They say if you take a small amount of the saliva remaining after it eats leaves, water the saliva down, and drink it, you’ll be able to sleep well.

Komala clings to a log pillow that its parents have given to it. Once it has grasped this log, it almost never releases it. If it does lose hold of its log, the Pokémon will be unable to sleep well and will thrash about wildly. Apparently it will sometimes cling to the arm of a Trainer it trusts.

Komala has the Comatose Ability, a new Ability that no other Pokémon has ever had until now. This Ability keeps it perpetually in a drowsing state, which prevents it from getting any other status conditions.

The ever-sleeping Komala’s expression sometimes changes, as if has awareness of its surroundings and the talking of people nearby. But it appears that these changes in expression are actually just a result of the dreams it’s experiencing. 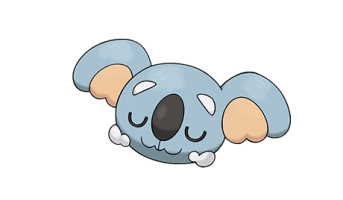 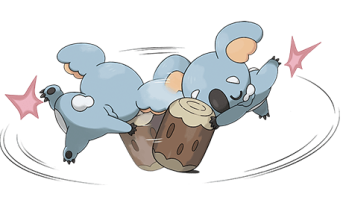 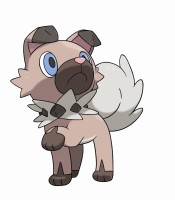 Rockruff is a sociable Pokémon, but as it grows, its disposition gets wilder. If it begins to howl when the sun goes down, that is proof that it’s close to evolving. It’s said that it leaves its Trainer’s side to evolve and returns again when fully evolved.

Rockruff stands bravely in battle, even when it’s taking damage. Although an opponent may be stronger than Rockruff, the Puppy Pokémon is so persistent, it keeps going until it outlasts its foe and gets the win!

Bite is a good move for Rockruff. It deals damage by biting an opponent with its sharp teeth. This may make the target flinch.

Rockruff greet others by rubbing the rocks around their necks against the other. This grating greeting is an expression of fondness, but a Trainer may find that love hurts. 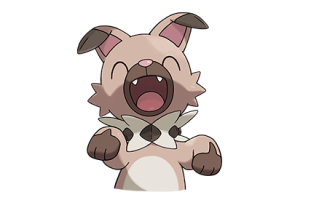 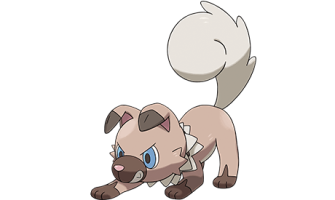 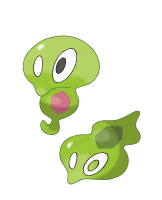 The Cores and Cells That Make Up Zygarde

Each of Zygarde’s forms are made by gathering together its cell-like components called Cores and Cells. Neither Cores nor Cells have the power to battle on their own as individuals. Only when gathered together can they take action—as Zygarde.

Cores are cell-like components that make up Zygarde, and only a small number of them exist. Cores serve as brains, and by gathering Cells, they can create Zygarde’s different forms. Cores have their own wills and sometimes act on their own.

Cells make up the parts of Zygarde other than its brain. There are many more Cells than there are Cores, and they exist all around the Alola region. Cells do not possess wills of their own. They act in accordance with the orders of a Core. 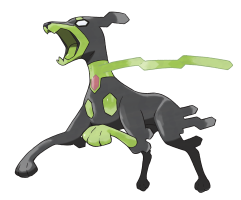 When an emergency occurs, this form can take action separately from Zygarde 50% Forme, which comprises its main body. It has just a single Core performing the functions of its brain, so it can only maintain this form for a short period of time.

During battle, it overwhelms foes with its sharp fangs. When running all out, its speed exceeds 60 mph.

Thousand Waves is also a move that only Zygarde can learn. This move makes it impossible for an opponent to flee or be swapped out of battle. 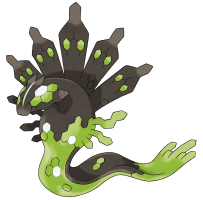 Zygarde monitors the Pokémon ecosystem to ensure that it’s not disrupted. Zygarde believes it has a duty to protect the ecosystem. While the power it possesses is overwhelming, this Forme contains only 50% of Zygarde’s cells. Out in the world, an equal amount of power waits to be brought together.

A Zygarde 10% or Zygarde 50% with the Power Construct Ability will be able to change forms into its Complete Forme during battle if its HP drops below half. 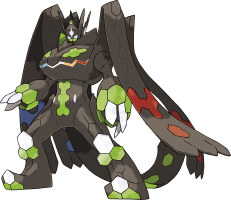 Zygarde’s completed form is specialized for battle, enabling Zygarde to fight with its full power and fulfill its duty of protecting the Pokémon ecosystem.

Core Enforcer is a move that only Zygarde can learn, and it can erase the Abilities of any opponents that have already used a move on the same turn that it’s used.

Its wings and tail each have their own Core. Each Core serves as a brain and can make decisions and act independently.

The player is shown riding Stoutland in the ninth screenshot below, confirming you can ride Pokemon again.

PokéBeach's news commenting system is completely integrated with our forums! , you can reply to this story's forum thread directly on this page with all of the forum's functionality!

Because this news story is about an ongoing topic, it is using the same discussion thread as previous news stories which covered the same topic. To prevent confusion, the thread's earlier posts have been hidden from this page.

WPM is a longtime fan of the Pokémon franchise and an avid fan of the games, anime, movies, and TCG. He has been involved in the online fandom since 1999 and officially opened PokéBeach in 2003 when he was 14. He currently attends USC's School of Cinematic Arts as a graduate student where he is focusing on film writing, directing, and production. He is currently writing his thesis film, which will go into production this fall in Los Angeles. If you read this send an e-mail to WPM for a cookie.