Wimpod, Bounsweet, Comfey, Mudsdale, Bewear, and Mimikyu from Pokemon Sun and Moon have been revealed, as have new Pokemon Global Link features and a new Hyper Training mode! 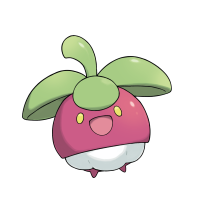 Because it exudes a delicious smell from its entire body, Bounsweet is popular with Pokemon and people of the Alola region. Bounsweet’s scent has a calming effect on humans, so many people let them live inside their homes as a sort of air freshener. Unfortunately, it’s sometimes swallowed whole by Pokemon drawn to its aroma.

When running away from other Pokemon, Bounsweet flees danger by skipping along the ground. Since its bouncy movements don’t convey to others that it’s actually in desperate flight, no one ever comes to its aid.

When attacked by enemies, it drives them off by rotating the calyx on its head. The downside is how dizzy it gets afterward! 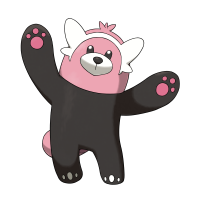 When Bewear is acting in a friendly fashion, just swinging its arms around, you must never dare to approach it carelessly. It is acknowledged to be a dangerous Pokemon, even within the Alola region. You may see warning signs posted near places it resides.

When Bewear grows fond of its Trainer, it may show that feeling in a fond embrace—but the force of that hug is tremendous! Trainers must teach these Pokemon how to restrain their strength when showing affection.

Some wild Bewear use amazing martial-arts moves. Apparently the Pokemon learn these moves by watching Black Belts practicing when they go out to train in the woods.

Bewear’s arms and legs are strong and highly developed. Its powerful spine enables it to lift objects weighing a ton or more. It loves to give crushing bear hugs—a tight hug from this Pokemon’s arms will split anything at all in two! 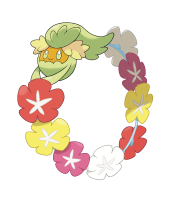 Comfey picks flowers and always carries them around. It makes a ring of blossoms and spreads oil from its body on it, which changes the flowers so they emit a soothing fragrance. It has a habit of giving these flower rings to those it’s fond of. The aroma can soothe both itself and its allies. Comfey also helps with the treatment of people and Pokemon at Pokémon Centers and hospitals, thanks to its aroma.

When attacked by other Pokemon, it throws its flowers at them to create an opening, and then it either flees or strikes back.

Comfey can have the new Triage Ability, an Ability that no other Pokemon has had before. With the Triage Ability, this Pokemon’s restorative moves gain the highest priority in battle. 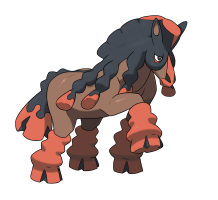 Mudsdale is known for its powerful body as well as its emotional fortitude, which keeps it from being agitated by anything. It never cries out, no matter what kind of trouble it’s in, and it defeats its opponents with a single powerful blow. Its legs are coated in protective mud, and the weight of this coating increases the force of its kicks. One kick, and a car is a pile of scrap!

Mudsdale’s running speed is not too swift, but it has excellent power and stamina. It can carry on for three days and three nights despite dragging loads of over 10 tons!

When Mudsdale gallops in earnest, the power of each hoof-clop can dig out huge holes, even in asphalt. Mudsdale is forbidden to run on some of Alola’s public roads. 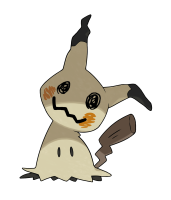 Mimikyu lives its life completely covered by its cloth and is always hidden. People believe that anybody who sees its true form beneath the cloth will be stricken with a mysterious illness. People in the Alola region are convinced that you must never try to peek beneath its covering. Mimikyu’s health fails when it’s bathed in the rays of the sun, so it prefers to stick to dark places. It’s rumored that the reason it covers itself with a cloth is to avoid sunlight.

The rising popularity of Pikachu-styled merchandise around 20 years ago is the reason that Mimikyu makes itself look like Pikachu. In fact, this Pokemon is dreadfully lonely, and it thought it would be able to make friends with humans if only it looked like Pikachu.

Mimikyu has the Disguise Ability, a new Ability that no Pokemon has ever before possessed. The Disguise Ability allows it to escape damage from an enemy’s attack just one time, and then its appearance changes. 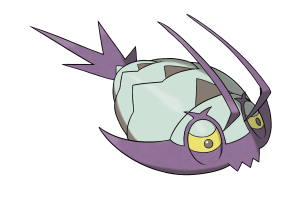 Wimpod have a cowardly nature and are wary of noises and sudden movements. If you approach them in a group, they’ll immediately run off. When Wimpod feel threatened, they spit out a poisonous liquid. The stench of this toxic fluid signals others that danger is near. Despite their extreme cowardice, their curiosity leads Wimpod to approach people or Pokemon that are standing still.

Wimpod eat and store anything that they find fallen on the ground. They also scavenge any garbage that’s been dropped in the sea, so they’re highly valued as cleaners. They sometimes carry pearls or other valuable items, so humans or Pokemon like Murkrow may target them.

New features are coming to Pokemon Global Link, a website that connects players around the world who are enjoying the Pokemon series. Pokemon Global Link will be ending its current Pokemon Omega Ruby, Pokemon Alpha Sapphire, Pokemon X, and Pokemon Y service and will be updated to make it compatible with Pokemon Sun and Pokemon Moon. The new update will introduce Friendly Competitions, a new function which has been created to allow players to become competition hosts and host their own original competitions where they can set the regulations. Two types of Friendly Competition will be available, Online and Live:

Online Competitions – These are competitions which are played over the internet. Players will be matched with an opponent and compete against each other for the best rating. These competitions can be open to Pokemon Trainers all over the world, or they can be set to only allow pre-approved Trainers to enter.

Live Competitions – These competitions allow players to host a competition and play together with friends and other Trainers who are in the same space. The Digital Player ID that contains competition regulations is generated as a QR Code, and by scanning the QR code into a 3DS system, participants can join and battle according to the set regulations. 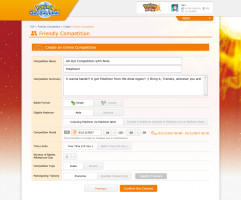 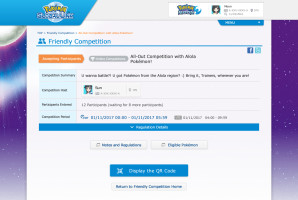 Also announced is the new Hyper Training function which can be used to increase Pokemon’s power. Traditionally, Pokemon grow stronger by raising their levels and increasing their base stats, however, such power is still affected by the individual strengths innate to each Pokemon. Hyper training allows Pokemon that have grown to Lv. 100 to increase their individual strengths, which has not been possible in previous Pokemon games. You can now make your Lv. 100 Pokémon even stronger.

Hyper training is done by Mr. Hyper, a new character who can be found somewhere in the Alola region who loves collecting Bottle Caps. By bringing him Bottle Caps, a new item which is obtainable in Pokemon Sun and Pokemon Moon, players will be able to carry out Hyper Training on their Pokemon.

The mythical Pokemon Magearna, which is planned for distribution in North America later this year, will be distributed with a Bottle Cap held item.