The Sun and Moon livestream at E3 has now concluded! All of the information that was revealed is posted below in chronological order. I covered the streams live on on our Twitter, so you can go there to see additional screenshots.

Pikipek can strike 16 times a second with its beak. These strikes are powerful enough to not only drill through hard wood but even shatter stone. The noises made by their blows can signal others. Some of these signals have been identified as warning signals and greetings among allies. Pikipek Trainers have grown to recognize them as well.

These Pokémon drill holes in trees and store food in the holes. They also like small, glittering objects and will tuck them away in their food stores, too. It’s often said, “Something lost, something missed, check inside the Pikipek nest.”

Pikipek will attack distant opponents by zipping seeds at them. These shots have enough strength to embed the seeds in tree trunks.

Yungoos is a big eater that is never satisfied. The majority of its long body is given over to its stomach, and its digestion is swift, so it’s always hungry. It has strong fangs, so it can crush and consume the hardest of objects.

Each Yungoos chooses its own particular route for searching out prey. It stalks along this route searching for food until it’s exhausted, at which point it drops and sleeps wherever it may be. It’s thought that these Pokémon decide their routes based on safety, so that there’s no risk in falling asleep at any time.

Yungoos is not a Pokémon that is native to the Alola region. It was brought to the region to help deal with the explosive population of a certain other Pokémon, and now Yungoos are commonly seen around the Alola region.

Some Yungoos have an Ability that no other Pokémon discovered has previously had. This Ability is known as Stakeout. With the Stakeout Ability, this Pokémon’s moves can deal twice the normal damage to any Pokémon that switch in or enter the field mid-battle.

Since this Pokémon is so common in the Alola region, it’s easy to catch one. But this Pokémon has a terrible temper when it’s hungry—and it demands a whopping amount of food.

Grubbin relies on its sturdy jaw as a weapon in battle and as a tool for burrowing through the earth. Grubbin loves electricity, which is why it can be found near power plants and substations. By wrapping tree branches in the sticky threads that it spews from its mouth, Grubbin can swing around like an actor on suspension wires!

The Mythical Pokémon Magearna will be making its debut in Pokémon Sun and Pokémon Moon. Magearna was created by a scientist of uncommon genius 500 years ago, and it has the power to perceive the emotions, thoughts and feelings of other Pokémon. Stored in the centre of Magearna’s chest is the Soul-Heart, an artificial life which was created using the life energy of other Pokémon. Magearna has the Ability Soul-Heart, a new Ability that no other previous Pokémon has had. This Ability raises Magearna’s Special Attack by 1 each time another Pokémon in the arena faints. 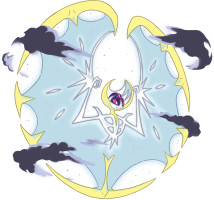 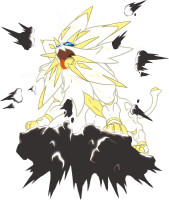 The Livestream Interview and Gameplay Footage

The stream featured Junichi Masuda, Shigeru Ohmori, a TPCi translator, and two Nintendo employees – one who played the games and one who interviewed Masuda and Ohmori.

Sun and Moon have a “life” theme. They went with the names Sun and Moon because the sun represents life on both planet Earth and in the Pokemon world; the moon also has an influence on life on the Earth. They also mention the Alola region is “teeming with life.”

The games are being directed by Shigeru Ohmori. Junichi Masuda is the producer this time around. Shigeru Ohmori previously directed Omega Ruby and Alpha Sapphire.

Solgaleo and Lunala tie in to the story in a unique way that hasn’t been done in previous Pokemon games before, though they were vague with what they meant. They also mentioned Zygarde will appear in the games in a special way.

They put a lot of thought into the Starter Pokemon’s animations and tried to make them cute.

Alola’s climate is extremely warm, so the characters are dressed in lighter clothing. The proportions of the character models are also more realistic in these games.

For the battle scenes, the time of day will affect the lighting, the mood, and even the shadow lengths of the Pokemon’s models.

When you’re battling a Pokemon you’ve encountered before, you can see which attacks of yours are super effective, effective, or not effective against that Pokemon. The effectiveness will be listed on the attack menu, making it very easy to learn how types interact with each other.

The characters are all in 3D now since they’ll be standing behind their Pokemon on the field.

You can see how much your stats have been altered by moves during the battle, as you can see to the left.

When you capture a Pokemon, the Pokedex will now show you white Poke Balls next to the Pokemon’s picture to show you if it has any evolutions or relatives. This is to encourage players to keep looking for more Pokemon. For example, if you catch Ledyba, you’ll see one white Poke Ball next to its picture to indicate to you there’s another Pokemon in its family (Ledian).

Ledyba is #020 in the Alola Pokedex and can be found on Route 1.

Yungoos, the Loitering Pokemon, is a Normal-type Pokemon found on Route 1. Its Ability is either Stake Out or Strong Jaw. It’s always hungry and looking for food and gets vicious if it doesn’t find any. Some of the Trainers that were battled in the livesteam had Yungoos.

Pikipek, the Woodpecker Pokemon, is a Normal / Flying-type with Keen Eye and Skill Link as its Abilities. It has two additional evolutions. It’s #10 in the Alola Pokedex. It can peck 16 times a second. It’s the 3D model we saw in the very first Sun and Moon trailer.

When you’re walking around, shadows will appear on the top and bottom of the screen to indicate when you’re getting close to someone who wants to battle you. This is to warn you and also to drive up suspense. The shadows are like when you squint your eyes.

After you get your Starter Pokemon and leave home, you head to the next turn for a festival that celebrates you and Hau going on your journey. Hau has a Pichu and a Litten if you pick Popplio. He seems to be a friendly rival, which always seems to be the case these days.

The stream introduced the Battle Royal, a new battle system where four players battle against one another at the same time in a furious melee. Each of the four Trainers in the battle chooses three Pokemon and sends one Pokemon into battle at a time. The battle finishes at the end of any turn when all of the Pokemon of one Trainer have fainted. The players are then ranked, and a victor is declared based on the number of Pokémon each Trainer defeated and the number of Pokemon each has remaining in play. This is a completely new way to enjoy Pokemon battles, and many interesting strategies will be discovered as each player must try to predict who will attack whom, or choose whether to act to save a player who is in a pinch in order to claim the number-one position before the battle ends.

And the most important thing everyone wanted: character outfit customization was confirmed to return in these games!

After the livestream was over, Pokemon posted a trailer reviewing some of the footage and also revealed another new Pokemon, Grubbin.