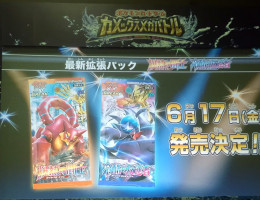 The pack art reconfirms that Xerneas BREAK and Yveltal BREAK will be in the set, as I reported when posting the Steam Siege news.

The set will be released in Japan on June 17th and in America on August 3rd.

Thanks goes to @aiueoagyo for sending us the photo!