Seedot, Nuzleaf, and Shiftry from XY11 Explosive Fighter / Cruel Traitor have just been revealed at Japan’s Blastoise Mega Battle tournaments. It’s a little hard to tell, but it looks as if Shiftry may be a shiny-colored Pokemon like most of the other dual-type cards in the set. Thanks goes to @mikkun_poke for the images; thanks also goes to Jake C. and Bangiras for the translations! 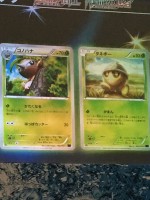 [G] Bide: Flip a coin. If heads, during your opponent’s next turn, if this Pokemon would be Knocked Out by damage from an attack, this Pokemon is not Knocked Out and its remaining HP becomes 10 instead.

[G] Harden: During your opponent’s next turn, if this Pokemon would be damaged by an attack, prevent that attack’s damage done to this Pokemon if that damage is 60 or less. 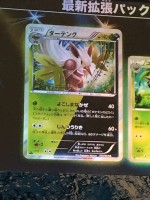 [G] Evil Wind: 40 damage. Until the end of your opponent’s next turn, all Pokemon Tools and Stadiums have no effect.

[C][C] Extrasensory: 60+ damage. If you have the same number of cards in your hand as your opponent, this attack does 40 more damage.