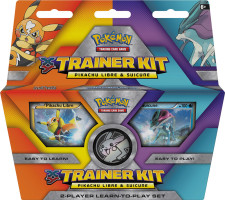 We now have an image of the fourth XY Trainer Kit featuring Pikachu Libre and Suicune!

As I posted a while ago, it will be released in stores on April 27th and will feature the two Pokemon as new holo cards. The kit will contain two 30-card decks, two guides, a two-player mat, damage counters, Special Condition markers, a coin, a deck box, and a PTCGO code card.

The two cards have not been released in Japan yet, so we probably won’t know what they do until the kit is released.

This kit is also meant to advertise Pokken Tournament since both Pokemon are playable fighters in the game.