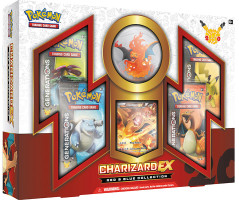 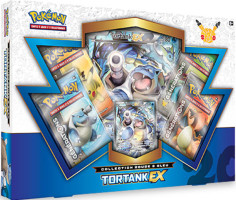 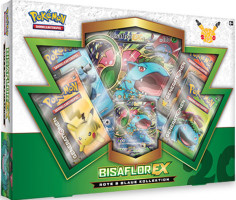 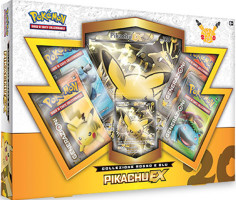 I’ve received images of the foreign language boxes of Blastoise-EX, Venusaur-EX, and Pikachu-EX’s Red and Blue Collections, as you can see above. We revealed Charizard-EX’s a while ago, which I’ve included above for completeness.

Each “Red and Blue Collection” comes with the featured Pokemon as a holo Pokemon-EX, as a figurine, four Generations booster packs, a card holder for your favorite cards, and a PTCGO card. Each will retail for $24.99. In Europe and other foreign countries, the figurines will be replaced by a jumbo card (as with the images above).

Charizard’s artwork features Flareon and Magmar, Blastoise’s has Gyarados and Vaporeon, Venusaur’s has Vileplume and (possibly) Scyther (in the bottom right corner), and Pikachu’s features Electabuzz and Jolteon.

As posted before, each card is an alternate art reprint of an existing Pokemon-EX.

Charizard’s box will be released on March 16th, Blastoise’s on May 18th, Venusaur’s on July 13th, and Pikachu’s on September 14th.