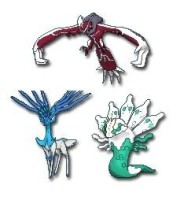 Each tin will feature either shiny Xerneas-EX, shiny Yveltal-EX, or (regular) Zygarde-EX. They’ll also come with four booster packs and a code card to unlock a playable deck in PTCGO.

The release of these tins likely means we’ll get Japan’s event distributions for shiny Xerneas, shiny Yveltal, and (regular) Zygarde around the same time.

On October 29th, Japan got a Level 100 shiny Xerneas with Geomancy, Moonblast, Aromatherapy, and Focus Blast. On November 5th, shiny Yveltal was distributed with Oblivion Wing, Sucker Punch, Dark Pulse, and Foul Play. And then on November 12th, (regular) Zygarde was distributed with Land’s Wrath, Extreme Speed, Glare, and Outrage.

There are currently no shiny Kalos Legendary cards in Japan, though there’s still a few months for that to happen.