Thanks goes to Jake C. for the translations!

Ability: Beginning Memories
This Pokemon can use the attacks of each of your Basic Pokemon in play. (You must still have the necessary Energy to use each attack.)

[C] Encounter: Search your deck for a Pokemon card, reveal it, and put it into your hand. Shuffle your deck afterwards. 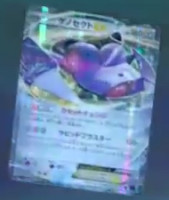 Want to join PokeBeach's news team? We're currently looking for TCG news writers, especially those who live in time zones where it's night in America (such as Europe). If this interests you, please fill out this application!

PokéBeach's news commenting system is completely integrated with our forums! , you can reply to this story's forum thread directly on this page with all of the forum's functionality!

Because this news story is about an ongoing topic, it is using the same discussion thread as previous news stories which covered the same topic. To prevent confusion, the thread's earlier posts have been hidden from this page.

Umbreon-EX from XY10 'Awakening of the Psychic Kings!'

Discuss news, collecting, and the TCG in general.

WPM is a longtime fan of the Pokémon franchise and an avid fan of the games, anime, movies, and TCG. He has been involved in the online fandom since 1999 and officially opened PokéBeach in 2003 when he was 14. He currently attends USC's School of Cinematic Arts as a graduate student where he is focusing on film writing, directing, and production. He is currently writing his thesis film, which will go into production this fall in Los Angeles. If you read this send an e-mail to WPM for a cookie.