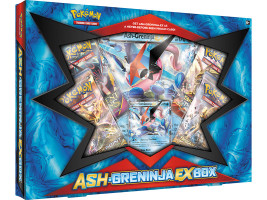 As I posted a few months ago, a new “Ash-Greninja-EX Box” will be released on April 13th in America and Europe. We now have its product image, as you can see above. It’ll contain a holo Ash-Greninja-EX promo, a jumbo version of it, four booster packs, and a PTCGO code card.

The promo card was originally given out to attendants who visited Japan’s World Hobby Fair Pokemon venues in January and February.

[W][C] Dancing Shuriken: 20x damage. Flip 3 coins. This attack does 20 damage times the number of heads to 1 of your opponent’s Pokemon. (Don’t apply Weakness and Resistance for Benched Pokemon.)