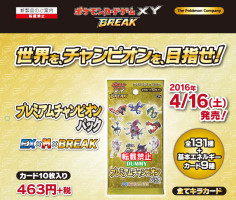 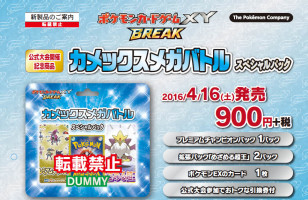 A new “Premium Champion Pack: EX x M x BREAK” will be released in Japan on April 16th for 463 yen. Although the name doesn’t imply it, it’s actually a full-blown set with 131 cards and nine Basic Energy! And every single card in the 10-card booster pack will be holo! We have no idea what this set will feature, but the booster pack image seems to imply Legendary Pokemon.

A new “Blastoise Mega Battle Special Pack” will also be released in Japan on April 16th for 900 yen. It will come with two Awakening of the Psychic Kings booster packs, an unspecified Pokemon-EX (Blastoise?), and one of the aforementioned Premier Champion booster packs. There’s a catch with this product though: you can only buy it you participate in one of Japan’s Blastoise Mega Battle tournaments. You will need to show proof of your registration ticket in order to purchase it.

We’ll bring you more information as soon as we learn it, so stay tuned! Thanks goes to Bangiras for the translations!