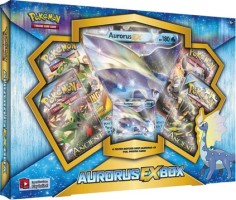 We now have a product image for the Aurorus-EX Box, which will be released in America and Europe on January 20th! The box will include a Aurorus-EX promo, a jumbo version of the same card, four booster packs, and a PTCGO code card. Thanks goes to Andrew for the image!

Ability: Freeze Guard
As long as this Pokemon is in play, each of your Pokemon with [W] Energy attached to them can’t be Paralyzed. (Remove Paralyzed from those Pokemon.)