Hello again PokeBeach! Treynor here with another article to prepare you for City Championships. We’ve had plenty of excellent articles come out lately about all sorts of solid decks. Writers such as Jimmy Perdarvis, JW Kriewall, Nath Bramald, Ryan Moorhouse, and Andrew Mahone have written articles with incredible decklists that I have been testing. Be sure to check those out!

Our Cities format is diverse with tons of good decks out there. The hardest choice when it comes to Pokemon is always the first decision you make before a tournament, and that is what deck you’re going to play. The other writers and I are all facing this problem ourselves. There’s just so many good decks! I’m going to talk about the importance of deck choice, how to narrow down your choices, the different kinds of decks you can play, and my top choices for City Championships.

This article will cover Standard, since I am looking mainly at the early Cities. Cities dates haven’t been announced yet here in the Nebraska / Iowa / Missouri / Kansas area, so I’m testing Standard to prepare myself for the bulk of Cities. 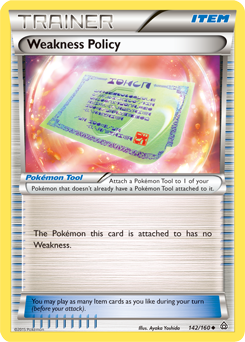 The Importance of Deck Choice

Your deck is your ultimate toolbox. It contains all the cards that you need to take six Prizes and circle the win on the match slip. Decks have good matchups and bad matchups. Our current Cities meta is a very diverse format where just about every deck has a flaw or terrible matchup. You can lose games solely based on what your opponent is playing.

Among skilled players, deck choice is probably the number one deciding factor on who brings home the most Championship Points. Deck matchups are so critical, even a very unskilled player can beat some of the best in the game if they’re bringing the deck that is the weak spot for the skilled player’s deck. This is huge when it comes to Cities. In small tournaments, playing the deck that beats the popular decks in your metagame can win you City Championships no matter your skill level. Have you ever seen the odd or weird decks that somehow won Cities? Those outlandish and weird decks may have hit a stroke of luck and avoided certain decks all day, but most of the time they had an incredible matchup against the majority of the most popular decks.

I very rarely have gone to a tournament and performed well with a deck that I didn’t think was a solid choice. All of your testing and preparation before a tournament is for you to make the correct deck choice. I cannot stress enough just how important that solid deck choices win tournaments. Scoping the meta and making the correct call is one of the most important skills in Pokemon.

One strategy that you have when selecting a deck is thinking of how many rounds you have to play and how popular you feel a deck will be. How many rounds do you think you will play against that deck. Is your deck equipped to maybe beat it one of those rounds? Will you just accept those rounds as losses and try to reach top cut anyway?

Most Cities are also in a best of one format. Your deck has to consistently get set up every game so you have a chance to win that one game. You have to have a deck that can set up and get going more than two out of every three games. At Regionals and Nationals, those types of decks can work because you can take a loss in each best of three match. In Cities, a couple of bad games can lead you to losing your chance of making the cut.

When testing a deck, every game is important. Even when testing against people at your league, you’re witnessing how well your deck sets up, and the hands that you can get. You get comfortable playing your deck. However, you should be focusing the majority of your play testing on your deck’s bad matchup. How well your deck can overcome that matchup should be one of the things you consider when making a choice. The other thing to consider is how popular that deck’s bad matchup will be and if you’re going to be facing it the majority of the day. Some decks have multiple bad matchups. Our Cities format is so diverse right now, that you’re bound to have one or two matchups that aren’t in your favor. You should focus your testing against these, maybe add a tech card or two to beat them, and consider if those cards hurt your consistency against the decks you should beat. We will discuss that more later, but it should be how you play test and narrow down your list of decks.

I know some players that will scout out an area and will make a deck choice almost entirely based on what they see being played, regardless of their comfort with the deck. These players tend to win big at small tournaments, but the strategy hardly works at large tournaments such as Regionals and Nationals where there are a lot of rounds being played with a huge sample size of decks to play against. This works very well in small tournaments because it’s easier to hit all the popular decks in four to seven rounds and it’s easier to get a good gage of whats being played in that particular tournament.

The other side of the spectrum is to play a consistent deck that isn’t very techy at all. A deck that just does what it does well and wins games regardless of what the opponent is playing. Sure, you can fit in a tech card or two in response to matchups that aren’t so good, but it is usually not worth it.

Most skilled players that I know play test a lot, make a deck choice well before the tournament, and get very comfortable with that deck. Players that are fairly new and are lacking in some skills should strive to get comfortable with a deck and play it until they can apply the solid principles to many other decks. We’ve all heard of the player that built their deck in the hotel room the night before and won the whole tournament, but these situations are rare and it’s surprising when that happens. In the 2012 City Championships, I changed my deck almost every tournament, never establishing an identity, and did poorly as a result. You can surely change your deck every week due to the shifting meta of Cities, but you should always make sure you are very comfortable with your deck before you show up with your completed deck list. That Cities experience in 2012 was very humbling to me and it was a good lesson. Some players can do this well and can excel, but I really like to play a deck that I’m comfortable with and know my matchups extremely well.

I mentioned comfort earlier as a factor in your deck choice and I want to discuss this a bit more. Comfort to me is always knowing what to do. Being comfortable with your deck means that you know your matchups and you know what to do in any given situation. You also have confidence that your deck can win. You’ve done your testing and you’ve tweaked your deck list to fit your playstyle. You are very rarely stressed when playing your deck, you know what to do. You misplay very rarely. When fatigued, your instincts kick in and you know what you need to do in any given situation because you’ve faced it a lot in your play testing. This is what comfort feels like. You consider yourself an expert on your deck. I know players that have played the same deck an entire season because they are comfortable with that type of deck and it fits their playstyle.

I picked the brains of the other writers here, and almost all of the writers tend to agree that a comfortable and consistent deck choice is typically what the correct deck choice is for the first week of Cities. As the meta tends to establish itself, then maybe it’s time to bust out a rogue counter-meta deck that can do well at a local Cities where you have a very good idea of what is being played. New players should always stick to what they’re comfortable with. Good Pokemon habits and strategies don’t always translate to other decks for newer players until they’ve been playing for a while. I’ve seen fairly new players win tournaments and do very well since they’re comfortable with their deck. Over time, they apply these skills to other decks. So if you’re fairly new, I would suggest sticking with one deck and playing it a lot of times, and try to play it throughout the entire Cities season. Don’t be too discouraged with a poor result the first week. Staying the course is the key to bettering yourself as you learn the game.