The official Pokemon Card website has issued a correction to the full art M Mewtwo-EX from Blue Impact, acknowledging that there was an error on their part and that the card’s attack text should be spelled “Vanishing Strike” instead of “Vanising Strike.”

This literally has no impact on the actual card game however, especially since Japanese players will just be going off the attack text on the body of the card. It’s more of an acknowledgment than anything. As in, “Yes, we noticed what you all pointed out.”

Since it seems Pokemon Card Laboratory just noticed the error, it’s unlikely the unlimited print run of the card will receive a correction. While we don’t have any hard stats, it’s probably the case that cards are printed months in advance. 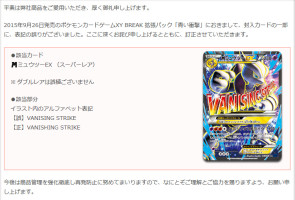