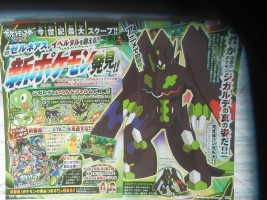 CoroCoro has leaked, revealing Zygarde will have many formes in the next game! Thanks goes to Vincent and Mia V. for the translations!

Additionally, CoroCoro revealed the anime will be renamed “Pokemon XY & Z.” It will start in Japan on October 29th.

Ash’s Greninja will get a new look in the show that is themed after Ash’s clothes, as you can see in the scan. Perhaps we’ll be able to customize the appearances of Pokemon somehow in the next game? Or could it be another Spiky-Eared Pichu situation where it’s a one-off event Pokemon to promote people buying the game?