Hey PokeBeach! My name is Nath Bramald and this will be my first article for PokeBeach. I had a hard time deciding on what I wanted my first topic to be because there’s just so many interesting things going on in Pokemon at the moment that all deserve attention. Seeing as the first half of Regionals are right around the corner, I eventually came to the conclusion that the best thing to talk about would be the Expanded format.

The Expanded format has played a fairly small role in organized play over the past year (outside of Europe) because it only really affected players who made Day Two at Regionals in America. It wasn’t even used in either U.S. Nationals or Worlds! This year Expanded is going to have a big impact and I want all of you guys out there to be fully prepared for what you will be faced with.

As for any European players reading this, you guys should take note too. With several Arena Cups planned within the next few months, this information will help you choose the best decks and practice against the right things as well. Without any further dialogue, let’s jump straight in!

As you can imagine, the main decks in Expanded are vastly different from the ones in Standard due to the additional 12 sets that are all legal. Let’s go into what can you expect to see. 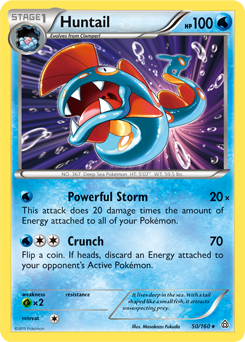 This one has been around since the very inception of Expanded. It isn’t as strong as it used to be, but it still has some potential. With this deck you aim to get Ho-Oh-EX in the discard, along with a few different basic Energy cards, then use its Rebirth Ability. You will use Huntail‘s Powerful Storm to hit extremely hard from there. This attack can hit for up to 240 damage which is insane for one Energy, especially on a non-EX Pokemon.

The reason why this deck hasn’t been winning is because of two things: Firstly, the deck loses to Archeops if your opponent can get it out before you get the chance to evolve your Huntail. Secondly, Ho-Oh isn’t a very reliable way of getting Energy onto the field because its Ability only works on a coin flip. Sure, you get to flip once every turn per Ho-Oh, but you can never predict when you will hit tails.

Night March saw a lot of play at the end of last format and most people are familiar with its play-style. The goal is to get around eight or nine Pokemon in the discard pile and then use Joltik, Pumpkaboo, or Mew-EX to attack for a lot of damage, often scoring a OHKO. A new tool that the deck gains in Expanded is Archeops. You can use Maxie's Hidden Ball Trick to get Archeops onto the Bench turn one, which slows down any Evolution-based deck. In fact, Archeops can automatically win you the game against decks like Vespiquen and Huntail because they won’t ever be able to use their main attacker.

Having played Night March at Worlds, I know that the deck (without Archeops) struggles a lot against Bats (I went 3-5 at Worlds this year, losing to Manectric-EX / Bats four times), but there’s an even bigger threat to the deck now that Ancient Origins has been released. Giratina-EX completely wrecks this deck by preventing it from attaching Double Colorless Energy or playing down Dimension Valley. This means that it will always take you two turns to power up an attacker, and every time you attach a basic Energy, your opponent will just play Lysandre and KO the Pokemon you attached it to. 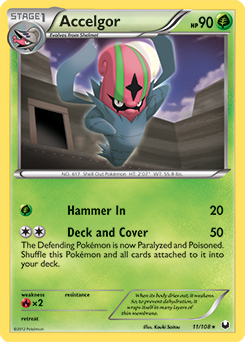 This deck saw a decent amount of play in Standard just a few years ago, taking the win for Trent Orndoff in the Senior division at Worlds 2014. Its strategy is very simple: use Accelgor‘s Deck and Cover to Paralyze your opponent’s Active Pokemon and promote Trevenant to lock your opponent. Your opponent will not be able to retreat their Active Pokemon, attack, or play cards like Switch and Escape Rope.

The deck has a harder time these days, largely due to Supporters like Lysandre and AZ, which get past Trevenant and can break the lock. Furthermore, the deck itself takes a fair amount of setting up in the early game because both of your main Pokemon are Evolutions. Not to mention throughout the game you have to constantly and consistently get Accelgor out of your deck to make sure that you maintain the lock. Sometimes all your opponent needs is just one turn where they can attack and they can tear your board apart.

Out of all of the decks that I’ve already mentioned, this one is the only deck that’s fairly new. I’m going to assume that most people know what Seismitoad-EX does by now due to it taking the format by storm throughout all of last year, so I’ll get right onto Giratina-EX. Giratina is very useful; it provides a decent lock, keeps Virbank City Gym in play, and against decks that rely heavily or even entirely on Special Energy, it can be used to almost single-handedly win the game. Not to mention, its immunity to the popular Mega Evolutions such as M Manectric-EX and M Rayquaza-EX makes it an excellent wall that can also dish out a lot of damage.

Honestly I’m not sure what to say in terms of weaknesses for the deck because doesn’t seem to lose to anything in particular. That’s not to say that it’s completely unbeatable. Of course every deck loses sometimes, but for the most part I think that it’s an incredibly well rounded deck. I do think that it struggles against Blastoise variants, but the matchup is 50-50 at worst.

Another new deck that we get from Ancient Origins is Vespiquen / Flareon. This deck runs a lot of Pokemon compared to most other decks, and for good reason. It’s because both Flareon’s Vengeance and Vespiquen’s Bee Revenge attacks need a large amount of Pokemon in the discard in order for them to hit for large amounts of damage. Unown from Ancient Origins is especially useful because not only does it discard itself, but it also allows you to draw through your deck really quickly and set up in the first two turns.

This is another solid and well rounded deck, despite the fact that it will flat-out lose to a turn one Archeops start from the opponent. This means it has a very poor matchup against both Yveltal-EX / Archeops and Night March / Archeops. Not to mention that if you don’t out-speed your opponent by getting the first KO, you will usually fall far behind in the game.

This deck saw a lot of play at the start of last season, but kind of faded out as time went on. In Expanded, it has quite a lot of things going for it that makes it strong. Firstly, it can be run with Jolteon which allows it to hit for a lot of damage on Pokemon like M Rayquaza-EX and Yveltal-EX. Secondly, with the use of a heavy count of Focus Sash, the deck can be incredibly annoying to deal with. This forces you to Lysandre the Donphan from the Bench and attack it twice just to get one Prize card. The best thing about this strategy is that they can’t use a card like Xerosic and Lysandre on the same turn, although you are prone to cards like Tool Scrapper, which becomes legal again in Expanded. Eco Arm can also be included in this deck to shuffle your Focus Sashes back into your deck to allow for even more disruption. To top it all off, you also have the power of Hawlucha to take quick, efficient Knock Outs on Pokemon-EX and Wobbuffet which can slow your opponent’s set up.

Again, this deck doesn’t do too well against Archeops decks, but the difference here is that it does have the option to go all-out with Hawlucha against Yveltal-EX / Archeops decks. Sadly, this tactic doesn’t work against Night March / Archeops because the Night March player will be smart enough to not bench any Pokemon-EX and will basically just checkmate you. Donphan also has a hard time against Archie's Ace in the Hole / Blastoise because it cannot deal with Articuno at all.

Those are most of the popular decks in the Expanded format, but I’m saving the two decks I feel are best for last: Yveltal-EX / Archeops and Archie's Ace in the Hole / Blastoise. And I’m not just going to go over them briefly, I’m going to give them the full deck analysis treatment! I will show you my deck lists for each deck, discuss the cards I included, matchups, and the strengths and weaknesses of each deck. Both of these decks seem like very good plays for Regionals, so make sure to read the rest of the article if you’re having trouble choosing on a deck!