On Thursday, Pokemon TCG fans quickly reported players James Stumbo and Kevin Norton for making the following post in a private Facebook Pokemon TCG group. Both players were driving to Worlds from Iowa, having received official invites as Masters players. 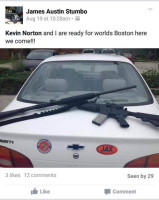 As a result of their Facebook posts, Pokemon fans and TPCi notified the Boston Police Department, who stopped both players as they entered the venue on Thursday (both were unarmed). Both could not produce a license to carry any guns, and after executing a search warrant, investigators discovered in their car “one 12-gauge Remington shotgun, one DPM5 Model AR-15 rifle, several hundred rounds of ammunition, and a hunting knife.” The two were arrested at a hotel on Saturday.

As a direct result of their threat, security was beefed up at Worlds with bag checks and bomb-sniffing dogs. Because of the unexpected bag checks, many players were unable to enter Worlds in time on Friday for the opening ceremony. However, considering the state of our country and where Worlds was specifically taking place (Boston), these were logical security measures. Props to Pokemon, the Boston Convention Center, and the Boston Police Department for acting so swiftly. It should be noted this is the first time a Pokemon event in the United States has been threatened in this manner, and that Pokemon is well-known for hosting a safe environment for all ages.

While some news outlets are stating or implying that the players had a “plot” to mow people down, it should be noted that at least one of the players is a hunter who has shown off his love for guns in Pokemon TCG groups in the past (in very poor taste, of course). The Facebook post above was more than likely another immature, insensitive, and irresponsible post from a stupid individual rather than a serious threat. The Pokemon group he posted in is also known for being “uncensored,” which is the kind of place that attracts idiots who try to be “cool” by showing off (the more outrageous they act, the cooler they are in their own minds). However, we don’t know what could have happened, and that’s why making any kind of threat is taken as seriously as the potential act itself.

Needless to say, both players are banned from Pokemon for life.