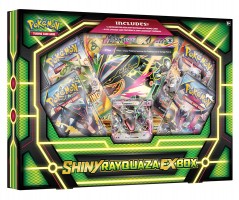 We now have information on the Shiny Rayquaza-EX Box we first posted about last month!

It’ll feature a jumbo card of a Colorless shiny M Rayquaza-EX with 220 HP (presumably the full art version from Bandit Ring), the Rayquaza-EX promo from the Rayquaza-EX Box but as a shiny, and four booster packs.

The M Rayquaza-EX has a new Ancient Trait called Θ Max: “When 1 of your Pokemon becomes this Pokemon, heal all damage from it.”

Since the Ancient Trait is Theta like other cards from Bandit Ring and shiny M Rayquaza-EX is already confirmed for the set, it’s almost certainly the exact same card. The box will be released in September after the release of Ancient Origins, hence why the product packaging doesn’t list the jumbo as a brand new card.