Umbreon and All-Night Party are two upcoming Japanese event promos and have been revealed on TV screens at this weekend’s Rayquaza Mega Battle tournaments. 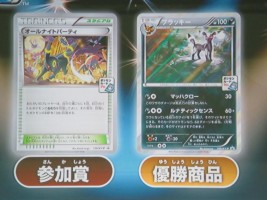 Once during each player’s turn, that player may remove the Special Condition Asleep from his or her Active Pokemon. If that player does, heal 30 damage from that Pokemon.

[D][C] Mach Claw: 30 damage. This attack’s damage isn’t affected by Resistance.
[D][C][C] Lunatic Sense: 60+ damage. Choose 1 of your face-down Prize cards and flip it up. If that card is a Pokemon, this attack does 60 more damage. (The card remains face up for the rest of the game.)

All-Night Party will be given out to all participants in the next set of Mega Battle tournaments. Umbreon will be the 1st place winner’s prize.

The cards will probably be stuffed into one of our future sets, perhaps the November set for Halloween?

Thanks goes to @nanimonoka for the photo and Franco T. and Sean T. for the translations!