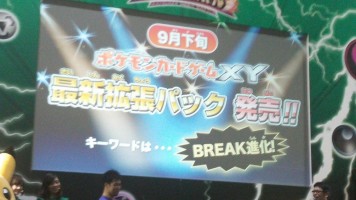 The latest Rayquaza Mega Battle tournaments displayed a teaser advertisement for the next set, announcing it will be released in Japan late September. The advertisement displayed two words “Break Evolution.” It did not however explain what those words meant, though it’s obviously referring to either the theme of the set or a new mechanic.

Evolutions always have trouble in the TCG because they’re a lot harder to get out, especially when there’s big Basic Pokemon running around, so perhaps Pokemon Card Laboratory will be addressing this issue with the new set. They’re already experimenting with this for Grass-types in Bandit Ring with Giant Plant Forest. Who knows though?