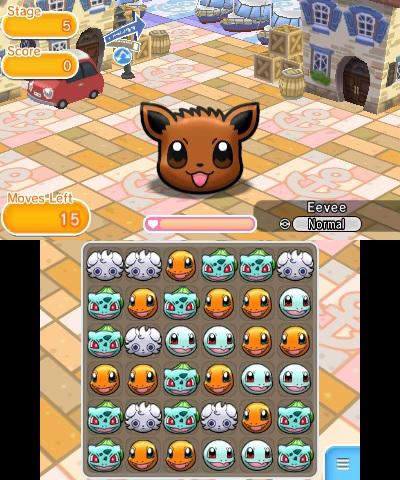 Today’s Nintendo Direct has announced that a new Pokemon puzzle game akin to Pokemon Battle Trozei will be released in the 3DS eShop this February: Pokemon Shuffle.

In the game you shuffle Pokemon tiles around to match and clear them within a certain amount of moves. As you clear a Pokemon’s tiles, they fire attacks at the enemy Pokemon you are facing on the top screen, allowing you to weaken that Pokemon. When you reduce that Pokemon’s HP to 0, you win the round.

Only four Pokemon are available on the tile screen at any given time and they are your Pokemon. Like the actual games, you can choose which Pokemon to use and they each have a type. To deal the most damage possible within the amount of moves you are given, you should, for example, try to clear Squirtle tiles if you are facing off against a Charmander. As you progress through the game, your Pokemon tiles will level up, evolve, and will also be able to Mega Evolve, allowing you to do even more damage to stronger foes. You can also use various items to help you deal damage more effectively. It’s a puzzle game combined with Pokemon battling, essentially.

Pokemon Shuffle will be free to play but if you lose you either have to wait 10 minutes to play again or pay, meaning there are in-app purchases. The items will also cost money.

A Charizard amiibo was also announced for release in North America this spring.