The official Japanese Pokemon TCG website has revealed that Primal Groudon-EX and Primal Kyogre-EX‘s special abilities are called “Ancient Traits,” which Primal Clash‘s set description revealed a few weeks ago. Gaia Volcano‘s Sceptile and Tidal Storm‘s Swampert feature Groudon and Kyogre’s Ancient Traits, but the promo Torchic that comes in Japan’s Metagross Collection has another one. Perhaps there will be different Ancient Traits throughout XY5?

Ancient Traits cards will feature “large illustrations,” as the official Japanese website calls them. Fan term: half art? Thanks goes to Bangiras for the card translations below! To discuss these cards and their new mechanic, check out this thread on our forums! 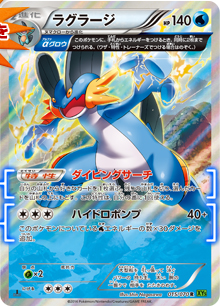 α Growth: When you attach an Energy card from your hand to this Pokemon (except with an attack, Ability, or Trainer card), you may attach 2 Energy cards.

Ability: Diving Search
Once during your turn (before your attack), you may search your deck for any 1 card. Shuffle your deck, then place that card on top of your deck. 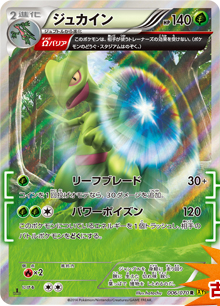 Ω Barrier: Whenever your opponent plays a Trainer card (excluding Pokemon Tools and Stadium cards), prevent all effect of that card done to this Pokemon. 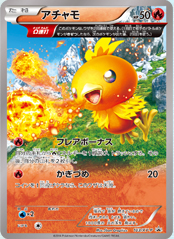 A new Acro Bike card was also showcased with Swampert as some sort of draw card, but the card’s text is way too small to read. Also revealed by the Japanese Pokemon TCG site are new Mega Gardevoir card sleeves! If you buy two booster boxes of Tidal Storm and Gaia Volcano from participating stores, you’ll receive 32 of them (which means you’ll need to buy four boxes of XY5 to sleeve a 60-card deck!). 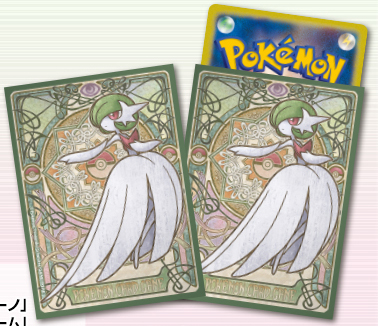 In other promo news, to celebrate the grand opening of Tokyo’s relocated Pokemon Center, a new “Mega Tokyo’s Pikachu” promo will be given out to shoppers at all of Japan’s Pokemon Centers from December 12th to January 16th (while supplies last). You only need to make one purchase to get one. 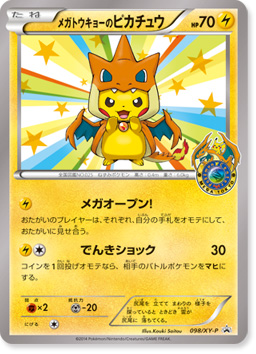 [L] Mega Open: Each player reveals his or her hand.
[L][C] Thundershock: 30 damage. Flip a coin. If heads, your opponent’s Active Pokemon is now Paralyzed.

Also announced were new “Toasty Pikachu” promo cards, which you can get when you purchase a UNIQLO t-shirt this winter. Each t-shirt costs 999 yen, or about $10. 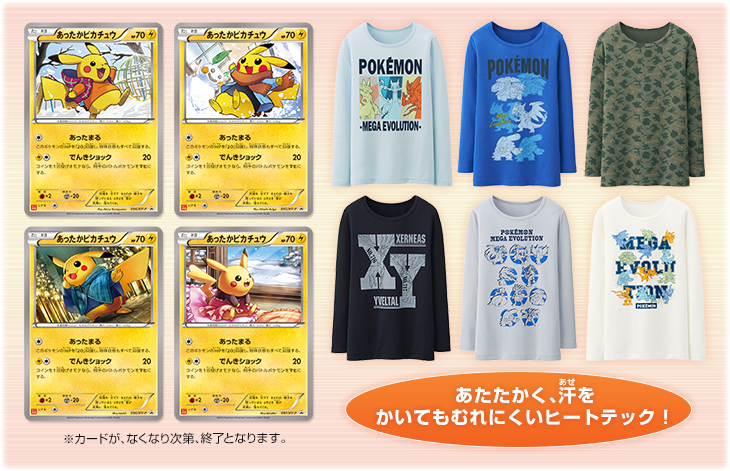 [C] Warm Up: Heal 20 HP from this Pokemon and remove any Special Conditions from it.
[L][C] Thundershock: 20 damage. Flip a coin. If heads, your opponent’s Active Pokemon is now Paralyzed.

And finally, Toys R Us stores are giving out jumbo Pikachu promos to those who purchase over $30 worth of merchandise. 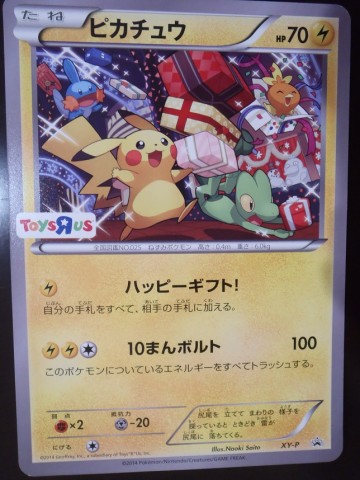 [L] Happy Gift!: Give your entire hand to your opponent.
[L][L][C] Thunderbolt: 100 damage. Discard all Energy attached to this Pokemon.