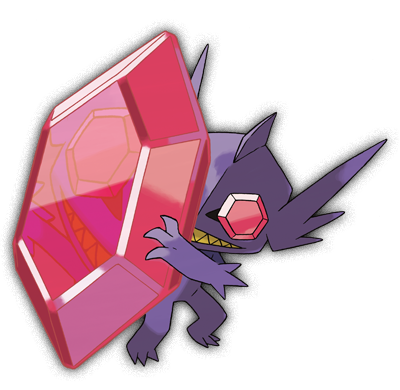 Pokemon has revealed Mega Sableye’s Ken Sugimori artwork, some hints about its stats, and revealed that its Ability is Magic Bounce. The Mega Evolution now weighs a whopping 354.9 lbs. because of its jewel, whereas Sableye previously weighed only 24.3 lbs. It is still the same height and typing.

Sableye has concentrated all of the energy from its Mega Evolution into the red jewel on its chest, which increases in size and detaches from its body. This enlarged jewel boasts incredible hardness, and it is said that no attack can even make a scratch on it!

When Sableye Mega Evolves, its Defense and Sp. Attack stats both get big boosts. Its Speed stat does decrease slightly, perhaps because of the weight of its huge jewel. Thanks to its Magic Bounce Ability, any moves that affect only stats or status conditions will be bounced back at its attacker.