A tiny scan of CoroCoro has revealed Lucario-EX and M Lucario-EX from Rising Fist (our Furious Fist set). The scan is too small to translate, but we’ll likely have a better resolution image in a few days when the magazine is officially released.

Lucario-EX has three attacks, the first for a Pokemon-EX in this era. M Lucario-EX has 220 HP and its signature attack is of course named Rising Fist after the set name, which does 140 damage for three Fighting Energy and with an unreadable effect. 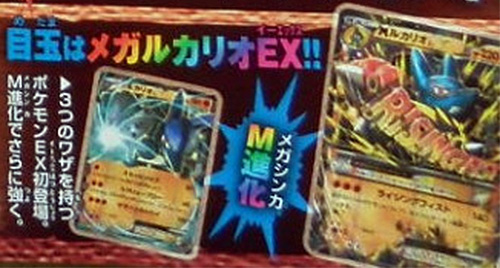