Pokemon.com has announced that the same rule changes coming to the Japanese TCG on November 8th will be coming to the English TCG on the exact same day with the release of the Kalos Starter Sets.

Also revealed is that Professor Sycamore is card #122 in XY. 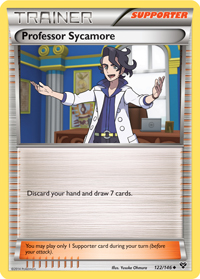 Flip a coin before drawing your opening hand. The winner of the coin flip now decides who goes first. Also, whoever goes first now can’t attack on his or her first turn. If you win the flip, decide carefully if you want the first turn or not!

Flip a coin. If heads, switch 1 of your opponent’s Benched Pokémon with his or her Active Pokémon.