A new Keldeo Wi-Fi distribution started today for non-Japanese Black 2 and White 2 games. The Keldeo is at Level 50, knows Sacred Sword, Swords Dance, Hydro Pump, and Aqua Jet, and comes with a PP Max. The distribution will last until February 12th.

Last weekend at Pokemon Day Chile, Nintendo announced that Meloetta will be distributed to Chilean players at local game stores in March. We will probably get Meloetta around the same time too, which means we’ll get the three hidden Legendaries of Unova in order this year (Keldeo in January, Meloetta around March, and Genesect again for the 16th movie promotion eventually). 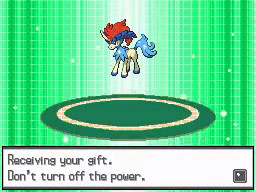