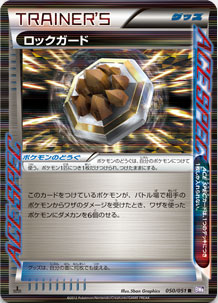 A new ACE SPEC card, Rock Guard, will be in BW8 Spiral Force / Thunder Knuckle. Its translation is below thanks to Puddizzle. Its effect is exactly the same as Rocky Helmet except that it places 6 damage counters on the Attacking Pokemon instead of 2.

If the Pokemon this card is attached to is your Active Pokemon and is damaged by an opponent’s attack (even if that Pokemon is Knocked Out), put 6 damage counters on the Attacking Pokemon.

ACE SPEC: You can’t have more than 1 ACE SPEC card in your deck.

You can use any number of Item cards during your turn.