Pokemon Smash just finished airing and only revealed a few small tid-bits about Black 2 and White 2. As we already know, when you take Keldeo to the forest outside of Sangi Town, Keldeo will leave its Poke Ball and join Virizion, Terrakion, and Cobalion, who will shoot out energy and initiate Keldeo’s transformation into its Resolute Form. There is a small cut-scene showing Keldeo transforming when you do this, as you can see below.

A small clip of Tachiwaki City was also shown. This is the city that Homika resides in (the Poison-type Gym Leader). Its English name is Verbank City, as revealed by a couple of future dub episode titles this week. 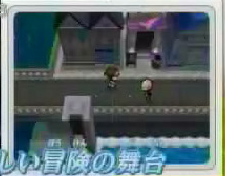 Part of Best Wishes season 2’s opening debuted and revealed that Delia, Professor Oak, Tracey, and Ash’s old Pokemon will appear in the opening. Isn’t it sad that Ash leaves his Pokemon to rot with Professor Oak? It’s a fundamental flaw of a show that never ends. Oshawott, your time will come too!

And an updated trailer for Kyurem vs. the Sacred Swordsman – Keldeo aired, giving us our first glimpse at Keldeo’s Resolute Form in the movie. Oddly, they’re not showing us many new scenes in these trailers. There used to be a time when they would release whole new trailers every other month or so.