Update #3 (Thursday) – Due to a huge mistranslation on our part, we erroneously reported that Meloetta will be downloadable at movie theaters. That news story has since been deleted – we do not know yet what Pokemon will be given out at the movie screenings. We apologize for the misinformation. | 9:15 PM – Added Kyurem’s bio below. | 8:45 PM – The movie’s premise has been added below thanks to Tensho from our forums.

A new 15th movie trailer has just appeared on the Pokemon movie website, which is an extended version of the trailer that aired the other day where Kyurem was chasing after Ash in the cave. In the first shot, we see energy from Reshiram and Zekrom being absorbed by Kyurem. According to the biography section on the website, Kyurem, with Reshiram and Zekrom’s genes, becomes Black Kyurem or White Kyurem (thanks goes to Tensho from our forums for the translation). Thus, the new Kyurem formes truly do seem to be a fusion of Kyurem and Reshiram or Kyurem and Zekrom. Now what will their types be? Ice/Fire and Ice/Electric? Click the thumbnail below to go to the trailer page on the movie website and then click the first thumbnail to watch it. 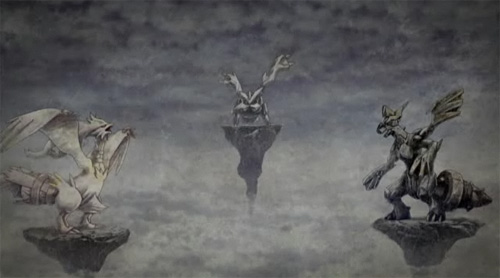 Story: On their way to their next destination, Roshaan, Ash and the gang meet and rescue a wounded Pokemon, Keldeo. Keldeo is the successor of the “Sacred Swordmen.” Then, suddenly, the “strongest Dragon on Earth,” Kyurem, appears and attacks them. Kyurem appears to be pursuing Keldeo. The story depicts Ash and the gang trying to get away from Kyurem’s pursuit.

Kyurem: The strongest Dragon-type Pokemon, its power is on par with Reshiram and Zekrom. Carrying the strongest heredity, it was born at the same time as Zekrom and Reshiram. It can change into Black and White Kyurem. Extreme cold radiates from its body.