I’m so excited for the movie this weekend!!! Throwing a party and seeing it multiple times like a true (or perhaps obsessed) fan! :D

As posted previously, to celebrate the screening of the 14th Pokemon movie in movie theaters this weekend, a Level 50 Victini will be distributed over Wi-Fi to Pokemon Black and White players from this Saturday to December 31st. A new press release has now confirmed that it will know Fusion Flare, Fusion Bolt, V-create, and Searing Shot and will come holding a Fire Gem. You can read the full press below for all the details. 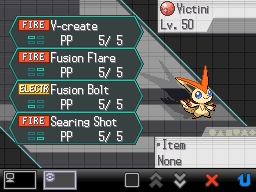 Obtain the Victory Pokémon Victini and See Pokémon the Movie: White-Victini and Zekrom

BELLEVUE, WA – November 28th, 2011 – Pokémon™ fans can enjoy a special Victini “double feature” this weekend. Starting Saturday, December 3rd, Pokémon Black Version and Pokémon White Version video game players can receive the Victory Pokémon Victini in their game via a special distribution, and discover it’s ready for battle with a set of very powerful moves! Coinciding with the Victini distribution’s launch is the U.S. theatrical debut of Pokémon the Movie: White-Victini and Zekrom, in theaters for only two days, Saturday and Sunday, December 3rd and 4th. To ensure you’re a part of the historic Pokémon the Movie: White-Victini and Zekrom theatrical event at more than 375 theaters nationwide, go to www.pokemon.com/moviewhite for a link to show times and locations.

From December 3rd through Saturday, December 31st, a Level 50 Victini will be available for Pokémon Black Version and Pokémon White Version players via Nintendo® Wi-Fi Connection service. This Victini has an unbelievable move set, including signature moves of Reshiram and Zekrom: Fusion Flare and Fusion Bolt! Victini also knows V-create, an immensely powerful Fire-type move, and Searing Shot, another Fire-type attack that hits all other Pokémon in most battles. To cap it off, this Victini holds a Fire Gem, which provides a one-time power boost to one of Victini’s Fire-type moves. Obtaining this special Victini will add star power to your Pokémon team!

To participate in the Victini character distribution event, you will need: