I upgraded the news software last night but it messed up the time in the “Latest News Box” – will fix tomorrow. 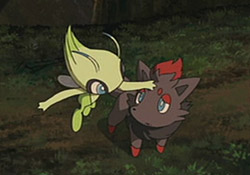 Following the shiny Legendary Beast distribution in January and February, Gamestop will apparently be giving away a Celebi to fourth generation games starting February 27th. The game cart that Gamestop stores will be using for the distributions has been leaked on to the Internet and contains data for the shiny Raikou, Entei, and Suicune in addition to the Time Travel Pokemon.

The Celebi on the cart matches the Celebi given away for the 13th Pokemon movie: it is at Level 50, is holding a Jaboca Berry, and knows Leaf Storm, Recover, Nasty Plot, and Healing Wish. For the American release, its OT is “GAMESTP” and its Trainer ID is 02271, referencing its probable February 27th, 2011 download date. When downloaded or traded to HeartGold and SoulSilver, the Celebi activates an event in Ilex Forest where you can eventually battle Giovanni and learn more about your rival. Once the Celebi is transferred to Black and White, you can obtain a Level 10 Zorua.

Like the shiny Beasts, Celebi’s download could last for a week, meaning Sunday, February 27th to Saturday, March 5th, but there is no confirmation of this and it could go on for much longer (especially since if it did last for a week, it would end the day before Black and White‘s March 6th date). I wonder how much Gamestop paid Nintendo to host this event. Children will potentially be dragging their parents to the stores four to five times – once for Raikou (Jan. 3-9), once for Entei (Jan. 17-23), once for Suicune (Jan. 31-Feb. 6), and once for Celebi (Feb. 27-Mar. 5?). Somewhere in that time parents will probably just decide to pre-order the games at Gamestop since they’ve been there several times already, meaning Gamestop will probably be rolling in the dough! If the Celebi event lasts in to the release of Black and White, it will be like killing two birds with one stone: let your kids download Celebi AND pick up or buy Black and White. Marketing! If the Celebi download ends the day before, you’ve pre-ordered the games from them, and you have been to all of the download events, that’s a fifth time you have to go back to the store!

Now that Celebi’s download is out of the way, what else could the Friday, March 4th date on the TPCi holiday card be? The premiere of Best Wishes on Cartoon Network? The European release date of Black and White? The date for States tournaments? Something else? Hopefully we’ll find out soon!